New Zealand's greatest Olympian, Sir Peter Snell, was planning on a roast dinner and a game of table tennis when he died in Dallas, aged 80.

Snell's wife Miki told Stuff her husband was having a good day, despite a health scare last month when he passed out while driving and crashed into several parked vehicles. 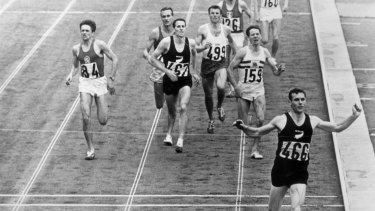 Peter Snell winning the 1500 metres at the 1964 Tokyo Olympics.Credit:Getty

Snell had been looking forward to his 81st birthday on Tuesday. He had had a recent history of heart trouble and a few weeks ago had to call off a trip to Monaco for a dinner honouring world mile record-holders.

"But I want people to know," Miki said, "that he was living his life. He was not bed-ridden."

"I've been in a preparatory mode, because I knew he was ill, he has been for 10 years.

"But he's done very well, had good quality of life and did right up to his death. He was a major part of my life. It's going to be a total readjustment for me, so it's just very sad.

"It was a wonderful life we had, I am grateful for having a life with him, I wish it could have gone on forever."

​Under the tutelage of famed coach Arthur Lydiard, Snell became one of the most dominant middle-distance runners in history, claiming gold in the only three Olympic events he ever contested.

He set world records in the mile and 800m and also won dual gold at the 1962 Commonwealth Games in Perth. 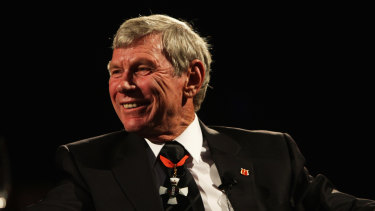 Sir Peter Snell talks to the audience during a New Zealand Olympic Committee dinner in 2009.Credit:Getty

Snell surprised himself and the rest of the world when he pipped Belgium's Roger Moens to win gold in the 800m in Rome in his first Olympic appearance.

He was then at the peak of his powers four years later at the Tokyo Olympics when he set a new Olympic record when defending his 800m title and made it three gold from as many events by easily winning the 1500m final.

His athletics career was relatively brief as he turned his sights to education after settling in the United States. He gained a Bachelor of Science in human performance from the University of California, Davis, and then a PhD in exercise physiology from Washington State University. He joined the University of Texas Southwestern Medical Centre at Dallas as a research fellow in 1981.

Snell was a big advocate for New Zealand to be a nation of participants.

"Get up from the couch and the computer and play something active," he said.

"New Zealand's health depends on it."

Leading the tributes for Snell has been Prime Minister Jacinda Ardern, who on Saturday said Snell was "a legend, here and around the world. Our thoughts are with Sir Peter's wife Miki and their family."

Caster Semenya: The three aspects to consider on testosterone rules that do not justify discriminating against her

This athlete ran a personal best. Then she learnt her hijab disqualified her