Olympic gold-winning hurdler Brianna Rollins-McNeal – a long time rival of Sally Pearson – could be banned for eight years after being provisionally suspended for an anti-doping violation, track and field's doping agency announced on Thursday.

Rollins-McNeal is the reigning 100-metre hurdles Olympic champion after winning in Rio, and in 2013 she became a world champion after beating 2012 London gold medallist Pearson in Moscow. 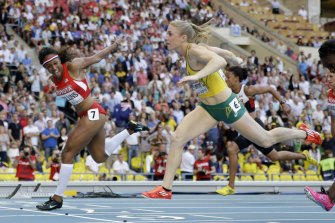 The Monaco-based Athletics Integrity Unit charged Rollins-McNeal, 29, with "tampering within the results management process" and provisionally suspended her from participating in competition before a final decision resulting from her tampering accusation.

The AIU said it could not provide further details on the case.

Rollins-McNeal declared her innocence in a statement and vowed to clear her name.

Under anti-doping rules, the standard sanction for a tampering charge is a four-year ban. 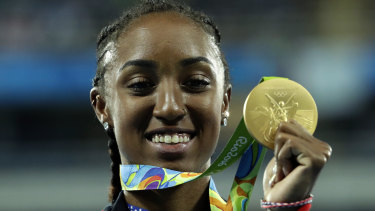 Gold medal winner Brianna Rollins from the United States shows off her medal during the medal ceremony for the women’s 100-meter hurdles final during the athletics competitions of the 2016 Summer Olympics.Credit:AP

But a guilty finding could attract an eight-year ban for Rollins-McNeal given the US athlete has already served a one-year suspension imposed in 2017 by the US Anti-Doping Agency.

Rollins-McNeal was suspended after she missed three drug tests the previous year. Her first strike came four months before the 2016 Olympic Games, when she missed a test that April.

The next two came a month after she won the gold medal in Rio de Janeiro, where she led the first sweep by American women in any event and the first by any country in the history of the 100m hurdles. That September, she missed two tests, first while travelling for a parade in her honour in her Florida home town, then again when she attended a White House reception for the Olympic team. She failed to update drug testers on her whereabouts on both occasions, her second and third offences in a 12-month period.

Rollins-McNeal was disqualified before running at the 2019 World Championships in Qatar after a false start in qualification. Her time of 12.26 is tied as the fourth-fastest run in women's 100m hurdle history.

Pearson, who missed the 2016 Olympics with injury, has been approached for comment.