The three-year gap between Olympic Games will help Australia’s track and field team peak in Paris in 2024 after a “sensational” performance in Tokyo, according to high-performance chief Andrew Faichney.

Australia won three athletics medals in Tokyo, with the expressive Nicola McDermott clinching  high jump silver on the last night of competition, coming hot on the heels of Kelsey-Lee Barber’s bronze in the javelin on Friday night and decathlete Ash Moloney’s bronze on Thursday. 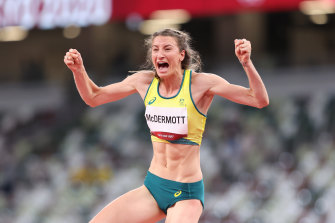 Australia won two athletics medals in Rio five years ago, but neither of them was in the stadium; both were race walking medals. There were three medals for Australians in London in 2012 and four in Beijing in 2008.

Australia’s performance, as measured not just by the colour of medals but by personal bests and national records, made it one of the country’s better Olympics, Faichney said.

“We have just had a fantastic bounce from 2018 [Commonwealth Games on the Gold Coast]. We announced ourselves in 2018. Nicola medalled [bronze] in 2018 and wins silver here. So many of the guys that had good performances here launched on the Gold Coast in 2018. 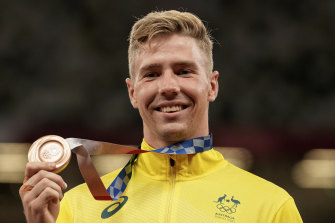 “We have done well out of that extra year in the Olympic cycle because of COVID. It helped many of the athletes – Rohan Browning, Linden Hall, Ash Moloney. And now having a three-year, shorter turnaround into Paris will help us.

“It is a really deep sport. We have seen the recognition Rohan [Browning] gets from making the semi-final [in the 100 metres], and being close to the final, I think the public really understand how deep the sport is and how deep the competition is and they have embraced the sport and seen how hard it is and how successful out guys have been.

“Our guys aren’t coming in to make up the numbers. They have come here to deliver and you can see that with the fantastic performances.” 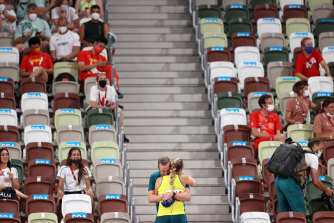 Faichney said strong early performances from Browning, who clocked 10.01 seconds in his heat, the fastest time by an Australian at Olympic level, and discus thrower Matt Denny, who finished just outside the medals, set off the momentum and a belief in the team.

“There was a moment we have three women in the last eight in the world in the javelin final [Barber, Kathryn Mitchell and MacKenzie Little] and one of them comes third, and at the same time they are out there throwing, two Australian women [Hall and Jessical Hull] are running around in the final of the 1500 metres.

“That was just sensational, such an amazing night to be sitting there watching that.

“Riley Day just terrific, Liz Clay [it’s the] first time she has got to this level. There are just so many really, really good results. I did get the feeling it built momentum through the week and that is what we will take over the next three years.”

Day, 21, clocked a personal best time and just missed the final of the women’s 200 metres, while hurdler Clay narrowly missed qualifying for the 100 metres final.

“Everyone recognises now that as much as it’s a good thing to qualify they want to go further,” Faichney said.

He added that the Australians’ relay hopes had been hurt by COVID-19, which forced them to withdraw from the world relay championships in April.