At the outset of this year's WNBL season, the Southside Flyers were clearly in better form than the Melbourne Boomers.

But if there's one thing to take from their showdown at the State Basketball Centre on Sunday, it's that there is nothing between them now – and 3015 fans saw that first hand.

The Flyers claimed a come-from-behind 75-73 win in overtime against the luckless Boomers, and will likely finish the season on top of the ladder. With just three weeks left the Boomers should finish right behind them in second. 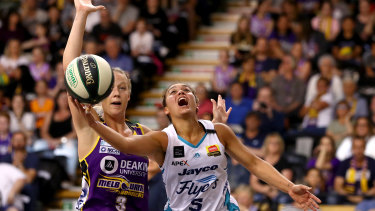 Laying it on the line: Southside Flyer Leilani Mitchell drives to the basket under pressure from Melbourne’s Sophie Cunningham.Credit:Getty Images

Flyers stars Jenna O’Hea (19 points) and Leilani Mitchell (21 points) kept their side in the game early on and made the smart plays at the finish while WNBA centre Mercedes Russell scored 15 of her 18 points after half time.

Magbegor’s game came when her club desperately needed it with WNBA import guard Lindsay Allen out injured, fellow import Sophie Cunningham fouled-out early in the fourth quarter and co-captain Maddie Garrick forced out after taking a tough knock late in the game. 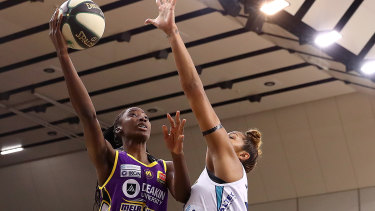 Ezi does it: Melbourne Boomers’ Ezi Magbegor turned on another masterclass but it wasn’t enough to secure the points for her team.Credit:Getty Images

After a chaotic last minute saw Mitchell’s free throws force overtime, it was a crucial basket from Russell with 48 seconds left which gave the Flyers the lead for good as the Boomers tired.

"It was pretty crazy but it was a great game for the fans to watch," Mitchell said.

"They played well, forced us into a lot of turnovers and we had a really ugly offensive game.

"We showed toughness and resillience and that will take us a long way in the playoffs."

With star import Lindsay Allen ruled out for the day and Monique Conti stepping up to the starting point guard role, the Boomers were aggressive in defense from the tip off. Their ball movement on offence helped free up Magbegor and Cayla George for baskets while O’Hea was leading the way for the visitors. 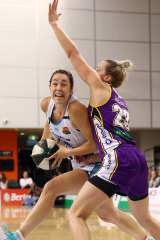 Off to a flyer: Southside’s Jenna O’Hea.Credit:Getty Images

O’Hea’s shooting helped close the gap between the sides but the Boomers took a 20-16 lead into quarter time after Magbegor scored on the buzzer.

The second term was a scrappy, defensive battle as both teams were effective in negating each other but neither could score regularly at the other end.

The Boomers ran out to a 29-20 lead midway through the term and held a solid edge for most of the quarter until Leilani Mitchell broke free in the final minute to nail a three and cut the lead to 35-30 at half time.

The Flyers threatened to take control in the third as their offence looked more comfortable and the Boomers started to show some nerves.

But Magbegor’s return from the bench proved telling as she made a basket in the key, then while left alone on the three-point line she took it upon herself and nailed a rare long shot.

Conti was being closely defended by the Flyers but she was fighting on and took some confidence from an assist to George for a three, with the Opals veteran shooting her a smile and a point as the home side led 53-47 at three-quarter time.

O’Hea appeared to take a knock to her left wrist but continued playing. Her shooting and steady play soon had the Flyers back level as Russell scored at the basket.

Magbegor had two blocks and two steals in the final minutes. It should have been enough for the win but Mitchell used her experience to draw a foul on Conti with five seconds to play and her two free throws forced overtime.

Russell's last basket proved too much but the Boomers know at full strength they can go head to head with the title favourites.

The Boomers play away to Canberra and Sydney on Friday and Saturday while the Flyers host Canberra at Dandenong Stadium on Sunday at 5pm.

NBA: Heat bounce back from embarrassing defeat with win over Bucks