The pair had rarely seen each other since celebrating Melbourne United's championship win early last year so there were hugs and jokes rather than trash talk and flexing when they met up last week. 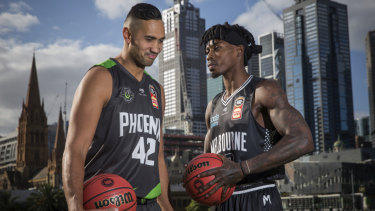 But when the ball is thrown up between Prather's Melbourne United and Wesley's South East Melbourne Phoenix this season, friendship will evaporate as both men are fierce competitors, with multiple NBL titles to show for it.

The new NBL season sees both stars return to Victoria with Prather reconnecting with Melbourne while Wesley was one of the star signings for the Phoenix.

The imports came together to show off this season's home jerseys for their clubs with Melbourne keeping their dark navy blue strip and newcomer Phoenix going with a black jersey with white writing and a fluoro green splash.

Prather and Wesley eventually found a way to find their fierce stares for the camera, but between poses there were plenty of laughs.

"Angry? I'm not so sure. I love him," Prather said when asked about taking on Wesley this season.

Wesley is an old hand at playing against former sides, having won titles with New Zealand and Melbourne United before moving to other teams.

"I'm standing next to Casey today trying to keep a straight face and we are just laughing and joking," Wesley said. "But in between the lines we will get it going. 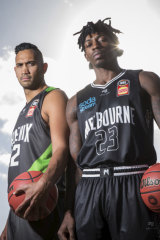 "When the ball is thrown up and it's winning and losing then we are all competitive enough to know there might be some stuff said and done but that happens. Then we'll shake hands after the game, give each other a hug and it's all good."

While the FIBA World Cup in China has the attention of most of the basketball world, both Melbourne and South East Melbourne are preparing for the new season which tips off on October 3 with the two Melbourne clubs kick-starting their rivalry at Melbourne Arena.

The Phoenix have their full roster on court except for franchise player Mitch Creek who is with the Australian Boomers. They have already begun pre-season games facing Brisbane Bullets in Traralgon tomorrow night and hosting Cairns Taipans at Kilsyth on Sunday.

But the group they have continues to tune up for the new season and face Cairns Taipans at Casey Stadium tomorrow night then Brisbane Bullets at Melbourne Sports and Aquatic Centre on Sunday.
"I can't wait to get everyone on the court, just to see what we've got," Prather said.

"You can see on paper how talented we are but until you get on court and put the pieces together it doesn't mean much of anything."

UNC coach Roy Williams reacts to win over Duke: ‘It was ugly’

The five most memorable games of Kobe Bryant’s NBA career, from 81 to a finale fit for Hollywood

Shaquille O’Neal reflects on Kobe Bryant’s death: ‘He was so much more than an athlete’
We and our partners use cookies on this site to improve our service, perform analytics, personalize advertising, measure advertising performance, and remember website preferences.Ok