In another life Yanni Wetzell might be contending for the Australian Open. Instead he is chasing a future in the NBA.

The South East Melbourne Phoenix rookie has arrived in the NBL as one of New Zealand’s most promising young players, with the 208-centimetre big man already boasting an array of post moves, a promising outside shot and footwork honed over many years as an underage tennis player. 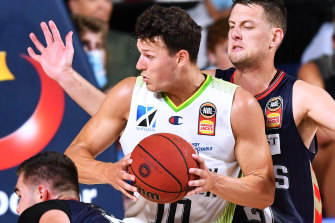 Wetzell, 24, starred on debut with 24 points and 11 rebounds in an overtime loss to Adelaide before a quieter performance with four points and seven rebounds in the Phoenix’s win over the same team on Wednesday.

No local NBL player has had a 20-and-10 game on debut since 2007 and, to top it off, Wetzell also recorded three steals and nailed a half-court buzzer-beater at half-time.

All those traits have the former San Diego State star listed as someone with NBA potential.

Wetzell dreams of making it to the next level and if he does it would be an enormous rise for a player who spent his teens pursing tennis before switching to basketball as a 17-year-old after a surprise growth spurt.

“It’s been a development process, I arrived in the US to play division two college, I had a lot of raw potential but wasn’t polished at all – that all developed in my five years over there,” Wetzell said.

“I have a bit to thank tennis for because my footwork is probably my best asset and it is probably like that because of tennis and a big reason why I have had success so far.” 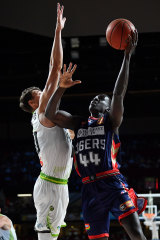 “He’s a great kid, very coachable and will do wonderful things,” Mitchell said.

“I think he’s another young guy in the NBL who we will see at the next level [NBA] at some stage.“

Wetzell was almost lost to the NBL during the prolonged off-season. The Phoenix signed him only for a German club to make an offer good enough to trigger his European out-clause.

But that deal didn’t work out as he encountered repeated delays attempting to secure a European passport. Fortunately, the Phoenix still had a roster spot open.

It’s proven a blessing in disguise as he has fit well with his teammates who are chasing a rare away win in Perth on Sunday against reigning champions the Wildcats.

Some players would be cowed by the thoughts of a 11,000 West Australians roaring against you but Wetzell can’t wait to hit the court.

“When it’s all against you then you need to come together as a unit. I always look forward to those sort of hostile environments.

“My dream is always to play on the biggest stage, if that [NBA] happens one day that would be awesome but my focus is to win as many games here and help this team in any way I can.”

Miss filling out a March Madness bracket? Here’s what the field of 68 could have looked like

March Madness 2019: No. 1 Baylor, Notre Dame will meet in the women’s championship game