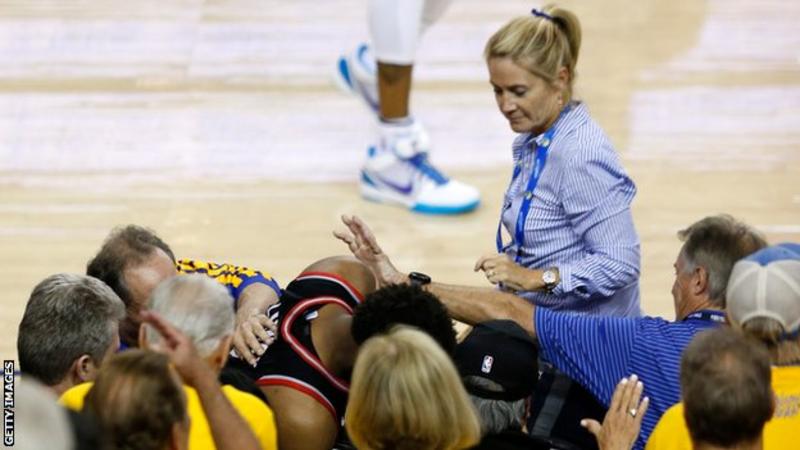 Golden State Warriors part-owner Mark Stevens has been banned from attending NBA games for a year and fined $500,000 (£394,000) for pushing and swearing at Toronto Raptors point guard Kyle Lowry.

The incident occurred in game three of the NBA Finals in Oakland on Thursday, when Lowry fell into the courtside seats diving for a loose ball.

Billionaire Stevens apologised and said it was a “lapse in judgment”.

The Raptors won the game to take a 2-1 lead in the best-of-seven series.

Stevens was ejected from the game after the incident and Lowry later said he had been sworn at “multiple times”.

Lowry said it “made it even worse” when he found out Stevens’ role at the Warriors and said it “sucks” that the incident overshadowed their win.

“It’s not a good look for the ownership group they have,” said Lowry. “He shouldn’t be a part of our league, there’s just no place for that.”

Stevens claimed he has “reached out” to try and apologise to Lowry, but the player said that has not happened, adding: “I don’t care to know him, he showed his true colours at the time.”

In a statement, the Warriors said they were “extremely disappointed” by their part-owner’s actions: “Stevens’ behaviour last night did not reflect the high standards we hope to exemplify as an organisation.”

Stevens is estimated to have a net worth of $2.3B by Forbes and the NBA says the ban is effective for the 2019-20 season.

“I take full responsibility for my actions and am embarrassed by what transpired,” he said. “I hope Mr Lowry and others impacted by this lapse in judgment understand the behaviour I demonstrated does not reflect the person I am or have been throughout my life.”

La Lakers star LeBron James addressed the issue on Instagram before the ban was announced: “There’s absolutely no place in our beautiful game for that at all.

“When you sit courtside you absolutely know what comes with being on the floor and if you don’t know it’s on the back on the ticket itself that states the guidelines.

“Being a fan, but more importantly part-owner of the Warriors, he knew exactly what he was doing – which was so uncalled for. He knew the rules more than just the average person sitting watching the game courtside.”

College basketball rankings: Michigan cracks top 5 in Coaches Poll while Tennessee holds on to No. 1 ahead of Duke