An emotional Andrew Gaze has paid tribute to the scores of people who helped build Australian basketball including his dad Lindsay after the Australian Boomers’ bronze medal win on Saturday night.

Lindsay Gaze who played and coached the Boomers along with working as an administrator for many decades is a member of both FIBA Hall of Fame and the Naismith Memorial Basketball Hall of Fame for his achievements in the sport.

Andrew Gaze called his father before he went on air to commentate the Boomers 107-93 win over Slovenia in the bronze medal game which came after four fourth-place finishes at Olympics since 1988. 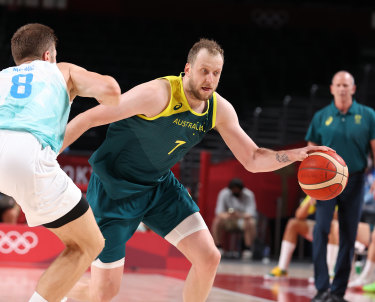 Joe Ingles drives to the basket against Edo Muric.Credit:

“I am so grateful that at 85, 86 years of age, he is able to see this” Gaze said on Channel Seven while speaking about his father.

“It is the work of him and others, right around the country who have done tremendous things.”

Gaze said he saw it as a victory for everyone who has contributed to the game in Australia.

“You do not have to win a medal to have a beautiful journey,” Gaze said while on Channel Seven on Saturday night.

“It is about what we want to stand for in representing Australia and the sport. And I think of those who have been along for the journey, that have their DNA on this.

“When you’re building stadiums. You are building a sport and trying to generate it and from me, I am so grateful and it is tough, but I’m incredibly grateful, before the game, I called up my dad, and just to hear him talk about what this means to the sport and the humility and, nothing to do with him, just about how this is going to be good for Australia and Australian basketball, and another tangible bit of evidence to say that we have arrived as a sport for both men and women.

“He started when there was 200 registered players. And he taught as a coach and as an administrator to build facilities, propagate the game, take it to the people, and the whole way, it was about the Olympics. The values of the Olympics. The spirit of competition was instilled in me at an early age.

“It is all about getting on that podium and showing the friendship and love and making sure that you do the right thing by the game in the nation and the pride that comes in putting on a green and gold jersey.”

Boomers captain Patty Mills had his best game in Australian colours at his fourth Olympic Games scoring 42 points in the win with one of his idols, Cathy Freeman, sending her congratulations via Twitter.

The Boomers players presented each other with their medals and Mills was between long-time teammates Joe Ingles (four Olympics) and Matthew Dellavedova (three Olympics) receiving his medal from Ingles and presenting an overjoyed Dellavedova with his medal.

Mills also screamed out the name of Boomers centre Aron Baynes (three Olympics) who injured his neck in the game against Italy and was not there to receive his medal.

“This one’s for the big Banger [Baynes],” Mills yelled holding up Baynes’ medal.

Mills said he planned to take his medal home to his parents Benny and Yvonne in Canberra. 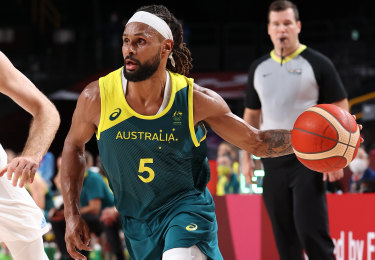 Patty Mills on the attack against Slovenia.Credit:

“They are probably sitting at home now,” Mills told Channel Seven as his voice broke.

“It is time to bring an Olympic medal home, back to our country, so I can hang it at mum and dad’s house.”

The Boomers side is a diverse cross-section of the sport with four players from regional Australian towns like Maryborough (Dellavedova), Warrnambool (Nathan Sobey), Mareeba (Baynes) and Tamworth (Nic Kay) along with players from Indigenous (Mills), African-American (Dante Exum, Josh Green) and African backgrounds (Duop Reath).

Forward Matisse Thybulle spent seven years in Australia as a child and qualified for an Australian passport before his family moved back to America.

Mills says this campaign is now the standard for Australian men’s basketball and he wants the team’s younger players to carry the program to new heights after four previous fourth-place finishes.

The Boomers had several first-time Olympians in this year’s squad and NBA draft pick Josh Giddey is among several young talents expected to come into the side in the coming years.

“It’s taken a lot of experiences, a lot of ups, a lot of downs, for us to get over the hump,” Mills said.

“And it’s our culture, at the end of the day, Australian culture, our Aussie spirit. It’s the boys being able to hang together and understand the meaning of what it means to represent your country, and how deep the layers go.

“For it to just come pouring out in moments like this. Now that we’ve made it over the hill, this is the standard now of Australian basketball and we take nothing less.

“We say gold vibes only is the standard and we don’t accept anything less, on the court, off the court, all of our preparation, and it pays off in the long run.

“I don’t know whether to cry, laugh, smile, a lot of emotions.”

Gaze was again emotional watching Mills speak post game and he paid tribute to the current team and those who came before.

“Tonight we saw 11 athletes, a beautiful man in coach Brian Goorjian, John Rillie and Matty Nielsen who put on the green and gold jersey to play, get a reward that has come from the generations working beforehand and for those people,” Gaze told Channel Seven.

“For all they have done for the game that culminates in this reward tonight. It is spectacular.”

Australia’s first NBA player Luc Longley, a three-time NBA championship winner with the Chicago Bulls, was also emotional paying tribute to coach Andrej Lemanis who led the team with Longley as one of his assistant coaches until the end of the FIBA World Cup campaign in 2019 where the team again finish fourth.

“That’s a culmination of all the basketballers in Australia and we’ve been heading there for years,” Longley told the NBL Twitter account.

“I’m so proud of all of them and the job the coaching staff has done, to pull this team together on short notice – that’s been amazing.

“After that USA loss [in the semi-final] that same old feeling of ‘here we go again’ – that was just so great, so good.”

Duke makes the most of its experience