Team USA managing director Jerry Colangelo has kept the World Cup door open for Kawhi Leonard and several other NBA stars should they want to play.

The USA named a 20-man selection squad for their training camp in Las Vegas in early August and it's understood the USA basketball will also name a "select" side of younger stars in the coming weeks to also join the camp. 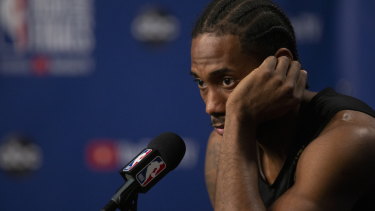 Leonard is starring in the NBA finals with the Toronto Raptors and is one of the favourites to win the NBA finals MVP, an award he previously won during a championship with San Antonio Spurs.

Projected No. 1 pick Zion Williamson is one player who could be named in that "select" side and play his way onto the final 12-man roster for the World Cup and the lead-up tour of Australia where the USA will play two games against the Boomers in Melbourne and one against Canada in Sydney.

But Colangelo said every USA squad is "fluid" due to NBA free agency beginning on July 1, which could see players either ruled out or change their minds and ask to come to training camp.

Leonard is one player who has yet to signal his interest in playing due to being a free agent and uncertainty of where he will end up.

"I've always maintained that in the selection of a [final] roster, it's a fluid roster," Colangelo said during a phone conference with Australian media on Tuesday.

"There could be additions, there might be a deletion or two. There are things that come up during the course of life being injuries, personal things, contracts.

"There could be some things that have some impact on some players on the roster so there could be a few additions but not many.

"As it relates to Leonard. We did extend an invitation and we haven't heard back from a few people including him but if a few individuals reached out and said they wanted to participate then we would take a hard look at that."

The Boomers named their extended roster recently with Ben Simmons, Patty Mills and Andrew Bogut among the mix of NBA, European and NBL-based players.

NBA stars Anthony Davis (potential trade) and free agents Tobias Harris, Kemba Walker, Khris Middleton and Brook Lopez are on the roster but all face potential moves so could be ruled out.

"I think that's indicative of how each of the players feels about their interest and commitment," Colangelo said.

"But there will probably be a few casualties – by that I mean some of these contract negotiations might take them out of the mix but we don't know that for certain.

"We feel we are blessed by having a big roster and the fluidity of the roster but there are no guarantees that everyone is available. What usually happens is we lose a few along the way due to things out of our control along the way."

New USA coach Gregg Popovich said he was well aware of the strength of talent around the world and felt the pressure of expectation around taking the USA to world title.

"The pressure is there," Popovich said.

"I definitely feel it but that would be the same for any game I go into whether it's a regular season game or a play-off game.

"I still feel that anxiety before every single game and I think that's important because when that stops, you should probably stop coaching."