The NBA will be back on free-to-air television this season.

The games will be shown in high definition on SBS Viceland and streamed on SBS On Demand while additional NBA content will be featured on SBS’s sport website. 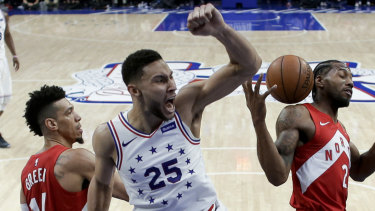 The growing number of Australians in the NBL has fed a local appetite for the American league. Credit:AP

The NBA deal is only for the regular season so it appears likely playoff games and the NBA Finals will only be available on ESPN or streamed on NBA League Pass.

The WNBA deal will include games from the first three rounds of the playoffs.

Live NBA games have been lost to free-to-air since One HD changed formats from a 24-hour sports channel in 2011 and let go of the NBA rights soon after.

But with Australia enjoying a record number of players in the NBA and the growing profile of the Australian Boomers and the NBL, SBS will bring live NBA back to the general public at a time when the sport is on a high.

It's believed some of the SBS games will be different to those shown on ESPN but it's unclear if there could be some crossover where they both broadcast the same game.

SBS will now boast a strong line-up of basketball content as it recently announced a two-year deal with the NBL to show 67 games on SBS Viceland and stream all games live on SBS On Demand.

"Premium international sports continue to be a focus of SBS's offering and we are thrilled to partner with the NBA and the WNBA to bring live coverage back to Australians for free," Taylor said.

"The NBA and the WNBA are among the world's most diverse leagues and basketball is an increasingly popular sport. Building on our recently announced deal with the NBL, these partnerships with the NBA and the WNBA make SBS the exclusive free-to-air home of basketball in Australia and are a great opportunity to bring new audiences, particularly younger viewers, to SBS VICELAND and SBS On Demand."

NBA Asia head of global content and media distribution Ramez Sheikh said the deal showed the interest in the sport in Australia.

"We are excited to partner with SBS to bring NBA and WNBA games and programming to a nationwide audience on free-to-air television," Sheikh said.

"These partnerships show that fans in Australia have a growing demand for basketball content and beginning next season they will enjoy outstanding NBA and WNBA coverage on SBS across broadcast and digital."

The NBA season begins on October 23.