As a former politician, David Bartlett knew that he had to sell a vision but in 2017 when he announced plans to make Tasmania “NBL ready in three years” he had no idea he was laying the groundwork for a 2022 NBL grand finalist.

The former Tasmanian Premier was recruited to become president of the Hobart Chargers, a club in the second-tier South East Australian Basketball League (now NBL1 South) that was in debt and struggling to stay alive.

Barlett was asked by Chargers coach and Tasmanian basketball great Anthony Stewart to join up and their plan was to make the Chargers as close to an elite club as possible and bolster Tasmania’s grassroots via school clinics from the three SEABL clubs in the state. 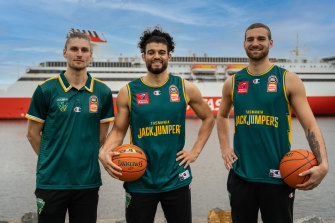 Those clinics were funded by a $250,000 grant from Bartlett’s successor, then Liberal Premier Will Hodgman, who saw the benefit of a program which Bartlett says has taken basketball to almost 50,000 children in the state.

The grassroots platform laid for the Chargers, who still play in the NBL1 South and won a men’s title in 2018, has become a bedrock of the Tasmania JackJumpers who will play in front of a sold-out MyState Bank Arena in Hobart on Sunday in game two of the best of five NBL grand final series against the Sydney Kings.

The JackJumpers are on a fairytale ride under American coach Scott Roth as their undersized team, who are playing without injured franchise player Will Magnay, stormed up the ladder in the final weeks of the season to end Perth Wildcats’ 35-year streak of finals appearances then upset top-team and reigning champions Melbourne United winning the last two games of their best of three semi-final series.

“I knew we had to build a bigger platform so I said ‘We are going to make Tasmania NBL ready in three years’ but I didn’t actually know what that meant,” Bartlett told The Age on Friday.

“But three years and four months later [NBL owner] Larry Kestelman announced Tasmania was getting an NBL license – so I missed my goal by four months.

“What we did was something the AFL has failed miserably to do in the past 20 years and that is go back to the grassroots.”

What has happened in Tasmania could be described as a sporting and business miracle as the Tasmania JackJumpers have gone from a 2-6 [win-loss] start to their inaugural season to facing the Kings who are part-owned by Andrew Bogut and have recent NBA players Jaylen Adams, Jarell Martin and Golden State Warriors NBA title winner Ian Clark on the roster.

On Friday, NBA superstars Stephen Curry and Klay Thompson sent videos of support for the Kings and their former championship teammates Bogut and Clark but while the Kings were re-tweeting those videos, Tasmanians were covering the state in JackJumpers green.

“It feels like going to Geelong on AFL grand final week when the Cats are playing,” Bartlett said.

“There is JackJumpers green everywhere. Tasmania has traditionally been divided north and south with lots of parochialism and ‘footy is played here, cricket is played here’ sorts of arguments up and down the Midland Highway.

“But I’ve never seen a team or an issue unite the state like this has.”

Australian rules football has always been the dominant sport in Tasmania despite the AFL never granting the state its own side, instead, Hawthorn and North Melbourne have deals with the state government to play games in Tasmania each season.

“Apart from photoshoots when Hawthorn or North Melbourne are here, the AFL almost does nothing in schools – they have really dropped the bundle big time,” Bartlett said.

“The AFL is here in the state but they are only about selling the top line product.”

Last weekend, in a sign of the challenges for footy in the state, one of the state’s best-known clubs, Glenorchy, forfeited its reserves game against Clarence. Glenorchy cited COVID-19, injuries and other factors as the reasons they couldn’t field a reserves team with the Tasmanian State League issuing a statement to say it would work with the club to strengthen its numbers.

“The AFL really needs to get its shit together in Tasmania and act now,” McGuinness tweeted.

“I have worked in Tasmanian schools for the best part of six years now and I can tell you that there is a hell of a lot more basketballs being bounced than there is footballs being kicked since the emergence of the JackJumpers.

“I really hope that it is not too late when the AFL act however I fear it is only going to get worse for local clubs in Tasmania with the success that the JackJumpers are having on the community and our next generation,” McGuinness added.

Bartlett, who admits he is no fan of the AFL, said he was hearing the same thing from teachers.

“Every teacher I talk to tells me they have a basketball hoop at school which used to be underutilised and now you can’t get near it at lunchtime,” Bartlett said.

“I think a lot of our politicians were motivated to show the AFL what we can do via basketball but we will see about the AFL, they might have left their run too late.”

That JackJumpers name has resonated with Tasmanians while Kestelman smartly built the team around a larger retail and entertainment precinct along the River Derwent which included redeveloping the worn down Derwent Entertainment Centre into the 4800 capacity MyState Bank Arena.

Kestleman and the NBL also have management rights over the venue which has further boosted the coffers of the fledgling club. 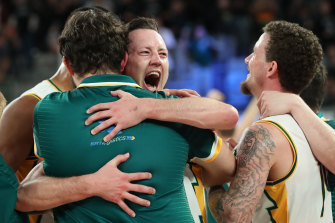 Reason to roar: The JackJumpers after qualifying for the grand final series.Credit:Getty Images

Bartlett said the team has sold out every game this season and has more members than seats.

“There is a lot of gnashing of teeth because people have missed out on grand final tickets for Sunday but that is the magic of this model,” Bartlett said.

“There are more members than seats so there is always demand and having control of the stadium makes an enormous difference. They get to clip the ticket on every beer or bucket of chips and they get to bring in the Red Hot Chilli Peppers or whoever when basketball isn’t being played. That is the special sauce here.“

Bartlett has boldly predicted the JackJumpers will have a similar profile-building impact on Tasmania’s national image over the next 20 years as the opening of MONA – the museum of old and new art – which has become the state’s biggest tourism attraction.

More boldly, he believes the JackJumpers can complete their fairytale run and beat the Kings for the championship.

“That Steph Curry video says it all,” Bartlett said.

“It’s the toffs of the town, North Shore Kings – who have massively underperformed over the last decade – against our working class, underpaid, undervalued bunch of players.

“They have everything to lose up in Sydney and it will be a joy to retweet that Curry video when we win it in game four on our home court.

Who is Hubert Davis? What to know about North Carolina’s reported next head coach