If Melbourne United's players had dared forget how they lost their clash with Perth Wildcats last Saturday, coach Dean Vickerman was quick to remind them.

"We missed a box out and it cost us the game-winner – you saw it on the video," Vickerman yelled late in training on Wednesday. 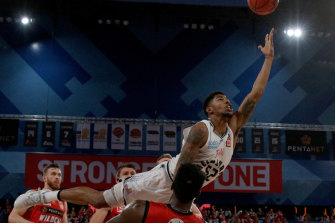 Dillon Stith drives to the basket under pressure from Dario Hunt of the Wildcats on Saturday.Credit:AAP

He was referring to an offensive rebound that led to Terrico White's game-winning three-pointer.

The injury-hit Melbourne United started their season with two close losses in last weekend's opening round, to South East Melbourne Phoenix and Perth.

Casey Prather (knee), David Barlow (thumb) and Sam McDaniel (ankle) are out injured. Two other key players, captain Chris Goulding and veteran centre Alex Pledger, have been given cortisone injections in the hope they can be fit to travel with the team to the United States on Thursday for two NBA pre-season clashes against the LA Clippers and the Sacramento Kings.

Melbourne will have 10 fit players, including fill-in import Dillon Stith and development guard Sam Short, then add an extra import small forward and an import big man for the two NBA games, as that league has no import restrictions.

The team were still finalising their two signings on Wednesday and wouldn't release any names.

What matters to Vickerman and to his senior players is setting a standard that will take the team to a third grand final series in succession and, hopefully, see them win a second championship.

But a title seemed far, far away at training on Wednesday as Vickerman continued to push his side with the usual penalties of push-ups for giving up offensive rebounds and sprints for losing a scrimmage.

Goulding was working on his recovery program as were Prather (knee) and Barlow (thumb). Those players are three of the team's prominent leaders and their absence stands out, especially as Prather and Barlow won't go to the US.

"I challenged our team's competitiveness today, just an absolute desire to win every game we play and that's what makes Goulding, Prather and Barlow elite," Vickerman said. 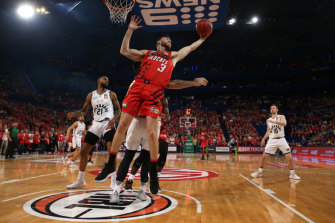 Offensive rebounds are a focus for Melbourne United. Here, Wildcat Nicholas Kay beats them to the ball during Perth’s win on Saturday. Credit:Getty Images

"They want to win every time and there is an edge this group has got to start to get in being able to compete that gets them a win on every possession."

Mitch McCarron has stepped up to a bigger role and he, unjustly, took the blame upon himself for the 94-92 loss to Perth after he missed a three-point shot on the buzzer.

McCarron nailed shot from a similar spot to win a scrimmage on Wednesday and he still believes his side is good enough to win games even with their big injury list.

"I missed the game-winner mate – that's the shot everybody wants," McCarron said. "The opportunity was there and I missed it. So I take full accountability for that and work on it every day so next time I won't miss."

Melbourne United leave for Los Angeles on Thursday and play the LA Clippers at Staples Centre on Monday at 6.30am with SBS On Demand showing the game live.