The NBL is rushing to send its Victorian and NSW teams interstate as a raft of border closures come into effect.

The Melbourne-based New Zealand Breakers and the South East Melbourne Phoenix will fly to Hobart on Friday while Melbourne United will continue their training camp in Cairns as talks continue on where they could be based. 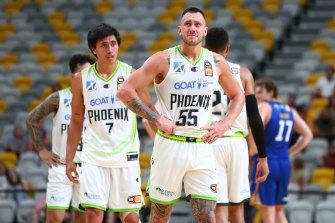 The South East Melbourne Phoenix will fly to Hobart on Friday, along with the New Zealand Breakers.Credit:Getty Images

The NBL is also working to find a new location for the Sydney Kings and The Hawks, who have both moved to Albury but could be moved to Tasmania or another location in the coming days, meaning five of the league's nine teams could struggle to play home games in the opening rounds.

Phoenix chief executive Tommy Greer said his club would continue to plan to play its first home game until ''notified otherwise'' by authorities.

"This season will require all teams and the NBL to be agile as we work through the ever-changing landscape of COVID-19," Greer said.

The league has made no call on any games as it continues to seek more information from the Victorian government and health officials.

All states have announced they will close their borders to NSW due to the ongoing outbreak in that state and Western Australia has also reinstated restrictions on Victoria, with only permitted entrants allowed to enter the state without having to spend 14 days in quarantine.

It remains to be seen if Tasmania will host any NBL games in the opening rounds.

The Derwent Entertainment Centre in Hobart is currently being rebuilt ahead of NBL expansion side the Tasmania JackJumpers coming into the league, so finding an acceptable venue could be difficult.

NBL chief executive Jeremy Loeliger said the Breakers and Phoenix would fly to Hobart on Friday while plans for the other clubs were arranged.

"Given the current situation in Melbourne we have decided it's prudent for both clubs to relocate to Hobart and they will be accommodated and train there under strict COVID protocols," Loeliger said.

"This will give us time to assess and work through the next steps required as we prepare for the forthcoming NBL season. We hope the current restrictions and resulting border closures will be eased as quickly as possible but we will need to stay flexible in our approach and we will continue to be guided by the advice of the relevant state health authorities.

"We are also working to move both the Sydney Kings and the Hawks from their current location in Albury, given the ongoing situation in NSW.

"Melbourne United is currently in Cairns where it is scheduled to play pre-season games against the Taipans tonight [Thursday night] and this Saturday.”

In other sports, the A-League can resume as laid out in its recently re-worked three-round fixture that was amended when the NSW outbreak began.

NBA: Warriors to play Thursday home game with no fans due to coronavirus