Philadelphia: Can the rift between Ben Simmons and the Sixers be repaired? Doc Rivers is not ruling it out.

The Sixers coach said Wednesday in an interview with ESPN that the team “would love to get Ben back … if we can”, despite multiple reports that Simmons no longer wants to be a Sixer and will not report to training camp next week.

“Well, I hope we can change that thought. That’s part of our job.

“There’s been so many times that this has happened that hasn’t been reported, and the guy comes back,” Rivers said. “Listen, we’re gonna go through it. We’re gonna always do what’s best for the team.

“But I can tell you up front, we would love to get Ben back and, if we can, we’re gonna try to do that. Ben has a long contract, so it’s in our hands, and we want him back.”

Rivers acknowledged that a recent conversation between Simmons and the Sixers’ brass occurred, during which Simmons “gave his reasons [for wanting out of Philadelphia], which we obviously didn’t agree with.” 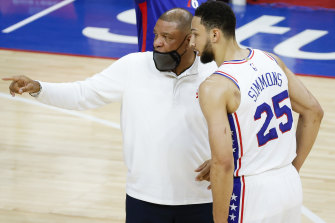 Rivers also pushed back on how his post-game comments about Simmons following Philly’s game-seven loss to the Atlanta Hawks in the eastern conference semi-finals were portrayed.

“What disappointed me, and I don’t do this ‘[blame the] media’ thing very often, you never see me do that. It was being portrayed that I was out there saying I don’t think we can win with Ben, and I do. I told Ben that the next day.

“What really disappointed me was, the next day, I went on and said, ‘Guys, you all know exactly what I was talking about,’ and no one heard it. They just kept running their narratives.

“You know, I’ve been in sports a long time, and I’m not misrepresented very often, but in that case I was. But it is what it is. Ben knows, Rich [Paul, Simmons’ agent] knows and I know.”

His relationship with the franchise soured during the 2021 NBA play-offs and Rivers said he had had limited conversations with the Australian since the 76ers’ season ended.

Simmons is a talented playmaker and defender, but his inability – or unwillingness – to take shots proved costly during the series with the Hawks. He also drew criticism for his performance at the foul line. He made just 34.2 per cent of his attempts (25 of 73) in 12 playoff games after shooting 61.3 per cent during the regular season. 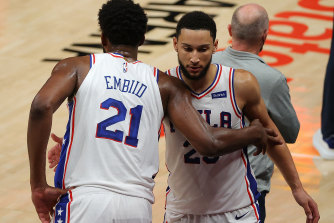 “Not much, but we’ve had some. And I get his feelings. I understand where he’s at right now, but we’re going to keep trying to work on it to get him in the right place.

“The greatest thing in sports is, you know it’s fair, you fail at times and then you get back on the horse and try,” Rivers said.

“You would be amazed if I told you how many times through a summer when you don’t win, which is 29 teams, how often you have to go through something similar to this. Because losing’s hard. People internalise it, and you have to deal with it. So we’re going to deal with this.”