Slovenia’s Luka Doncic is an NBA superstar but he may be battling a painful left wrist injury when his nation faces the Boomers in the bronze medal game on Saturday night.

Doncic led Slovenia to a win at a last-ditch Olympic qualifying tournament in July to secure a place in Tokyo. They were then undefeated until France beat them in the final seconds of their semi-final on Thursday night. It was Doncic’s first loss with the national team in his 18th appearance. 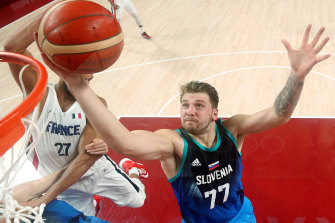 Doncic injured his non-shooting wrist in the second half and barely took a shot in the final term. He instead set up his teammates, posting an incredible 18 assists (two short of the Olympic record of 20) along with 16 points and 10 rebounds for a rare Olympic triple-double in the one-point loss to France.

Doncic was shattered post-game, but, with ice on his left wrist, declared he would be fine for Saturday’s game. Slovenia and Australia are both chasing their first Olympic medal in men’s basketball although Slovenia are attempting this in their first appearance at the Games.

As great as Patty Mills has been for Australia in leading the team in scoring and driving the side to make history, Doncic has posted numbers that few in Olympic basketball history can match, scoring 48 points in the first game which was only just shy of Brazil legend Oscar Schmidt’s record of 55 points.

Schmidt loved Doncic’s performance so much that he posted a video on social media encouraging him to break his record.

But if his wrist restricts his scoring, the Boomers will have to make sure shooters such as Klemen Prepelic and Zoran Dragic, along with centre Mike Tobey, don’t pick up the slack.

The Boomers’ aggressive, switching defence has troubled teams and there may be a temptation to start swingman Matisse Thybulle as a direct match-up for Doncic although the Boomers could opt to keep their same starting group and aim to use their team defence to keep Slovenia under wraps.

Boomers coach Brian Goorjian was asked about Doncic before the France versus Slovenia semi-final and he admitted his team would need a plan to handle the Dallas Mavericks superstar.

“He’s one of the most exciting basketball players that I’ve seen and I’ve been around the block,” Goorjian said.

“He takes what you give him. In this tournament we’ve seen him get 48 points and they win, then you double him and he find his rollers and shooters.

“He’s 22 years old and with what he is doing in the NBA, there are some really exciting times ahead for him.

“But when it comes to stopping him, I don’t have an answer. We’re gonna have to come up with something as he’s really special and he gives them a chance.”

Australia’s Nic Kay was a part of the side which lost the bronze medal game to France at the 2019 FIBA World Cup and he wants his side to have a “short memory” and take the challenge up to Slovenia.

“It’s about doing what we can, do the little things and make sure we’re putting in a full-game effort to get that win,” Kay said.

“We are in the top four teams but you want to take home some jewellery. I’m excited to get out there as a group and play.”

The Boomers play Slovenia on Saturday at 9pm AEST.