Two Philadelphia 76ers fans who made obscene gestures and directed profanities at Washington Wizards guard Isaiah Thomas during last weekend's game, convincing the player to enter the stands, have been issued a 12-month ban from the Wells Fargo Center.

The fans, whose names were not released by the team, admitted to arena security they had used inappropriate language and gestures, a violation of the arena's conduct policy. Their seats in section 120 belonged to a 76ers season ticket holder and as a result of the incident, the team revoked the ticket owner's privileges and issued a refund for the remaining games of the season, a spokesman said. 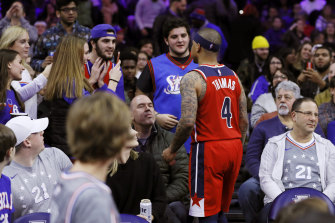 Isaiah Thomas confronted Philly fans in the stands on the weekend. The fans have since been banned for a year.Credit:AP

Late in Saturday's game, Thomas walked several rows into the spectator stands to confront the pair because he said one had held up both middle fingers and yelled, "F— you, b—-!" three times. Thomas was ejected for entering the stands and may face punishment from the league, which has a strict policy against such behavior after a brawl between players and fans at a Detroit Pistons game in November 2004. The "Malice at the Palace," widely recognised as one of the NBA's lowest points, led to the suspensions of nine players from the Pistons and Indiana Pacers.

Saturday wasn't the first incident this month between a 76ers fan and an opposing player.

Toronto Raptors guard Kyle Lowry, who hails from North Philadelphia, exchanged words with a fan while heading back to the visitors' locker room on December 8. After being heckled, Lowry yelled at the fan, "Come see me!"

In another incident, Utah Jazz guard Donovan Mitchell had a courtside fan ejected for what he perceived as rude comments.

"He was being disrespectful," Mitchell told reporters, following the December 2 game. "I like Philly. I think talking trash, I appreciate it, [it's] part of the game. When you start talking personal stuff, that's when things get out of control … I won't repeat what [the fan said]."

According to a 76ers spokesperson, that fan had sneaked down to those seats near the end of the game and heckled Mitchell. The two prior incidents factored into the team's decision to issue a year-long ban for the two fans who offended Thomas, as well as to come down hard on the season ticket holder.

Thomas has interviewed with NBA security regarding the matter and is waiting to hear the league's reaction. On Saturday night, he expressed confidence that the league would understand his perspective.

"I don't know," Thomas responded when asked if he thought he would be suspended. "I know they're going to investigate, and I'm going to tell them the same thing. So, if you're for the players, you're going to back me, because I didn't do anything disrespectful. I just needed to look [the fan] in the eye and let him know, you're never going to disrespect me. I'm not stupid. I'm not going to go in those stands and beat nobody up. I was raised better than that."

After a number of conflicts between players and fans last season, most notably an ugly flare-up between Russell Westbrook and a Utah Jazz fan and an incident during the NBA finals between Lowry and a Golden State Warriors minority owner, the NBA adopted a zero-tolerance policy for spectator behavior in October.