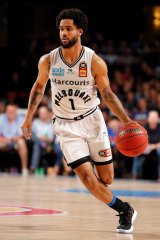 Melo Trimble has struggled to recapture his early-season form.Credit:Getty Images

Melbourne United coach Dean Vickerman knows his team has a fight on its hands to make the NBL finals.

Melbourne's record fell to 11-10 with seven games to play after a 100-86 loss to Adelaide on Saturday night.

United had previously beaten the Sixers (11-11) comfortably in two meetings this season but found themselves outplayed at both ends.

Among the issues for United was import guard Melo Trimble continuing his offensive struggles. He scored just five points on two of 13 shooting, but wasn't alone as several other key players also had nights to forget.

This is the last week Melbourne can bring new players in if they are to play the seven games needed to qualify for finals. But replacing Trimble, a high-profile signing who was excellent earlier this season, looks unlikely unless they find a match-winning veteran who was ready to play immediately.

Vickerman said Trimble needed to focus on his defence.

"Melo's had a number of games recently that he wouldn't be happy with, [compared] to the standard he was playing at at the start of the season," Vickerman said.

"We did what we could this week to challenge him, then encourage him to be better, but it didn't make a change tonight so we have to find a different angle this week to get him up to scratch.

"We didn't have enough contributors tonight. Chris [Goulding] made the majority of our threes balls, we have a lot of other people that haven't [made shots] tonight.

"We pushed Melo to, regardless of whether he was making shots, to focus on defence and he could have been better in some situations guarding [Jerome] Randle down the stretch."

Melbourne must win at least four of their last seven to make the finals.

In past years 15 wins has been good enough to make the top four but with the race so close, 16 may be the magic number. That would require United going 5-2 to finish this season.

"This quarter of the season, we won three games on the road and lost one plus we lost three at home," Vickerman said.

"It was a substandard quarter for us but we have a quarter to go and we need a positive score, whether that be 5-2 or 4-3. We need a positive outcome, we have three at home, four on the road."

Melbourne captain Goulding had 26 points in the loss and he summed up his side's predicament well.

"When we play to our ability we have shown we can beat anyone," Goulding told NBL Media.

"But we've also shown anyone can beat us. We have to figure it out."

College basketball rankings: Kentucky, now 0-2 away from Rupp Arena, falls out of the Top 25 And 1