Melbourne United can't look to the mathematics any longer. Their clash with the Brisbane Bullets on Saturday night is season defining.

The race for third and fourth spot in the NBL remains tight, with Cairns (14-10 win-loss) almost having third spot in their grasp while Brisbane (13-11) are ahead of United (12-12) in fourth, meaning winning this game is a must. 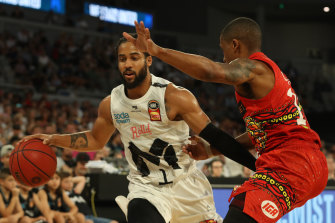 "Whoever is able to win that one really puts themselves a step ahead to claim fourth spot.

"Certainly the games both teams have left is against similar quality teams. It's a huge game for us."

Melbourne will take Shea Ili and Alex Pledger to Brisbane. Ili was among their best on Wednesday but continues to play through a painful wrist problem, while Pledger sat out the Perth game after battling an illness.

Injured import Casey Prather hoped he could come back into the side but he was ruled out on Friday.

But the Bullets face New Zealand, Perth (in Perth) and Cairns in their remaining games after Melbourne, so will likely take at least one loss.

United's best possible finish is 16-12, which should see them into the four, while 15 wins would also do the job as long as their percentage stays ahead of their competitors.

The Bullets have been impressive in the second half of the season, with NBA import Lamar Patterson an MVP candidate and young power forward Will Magnay earning NBA interest for his athletic play in the paint.

Those two aside, the likes of Nathan Sobey, Cameron Gliddon, Jason Cadee, Mika Vukona and Matt Hodgson continue to play their roles for coach Andrej Lemanis.

United point guard Melo Trimble has played two strong games after several weeks of struggles but their bench is looming as the difference between making the finals or missing out.

The bench scored 32 points in the win over Perth, led by centre Jo Lual Acuil, import Stanton Kidd and Ili, who also provided some energetic defence.

Acuil could be especially helpful in reducing the influence of the likes of Magnay and Hodgson.

"If errors have been made by our starters, I haven't always trusted our bench," Vickerman said.

"I was tough on people [against Perth]. It made a statement to everybody and the bench sees that and realises they can stay out there."