Melbourne United will know what they need to do to make the semi-finals before their clash with South East Melbourne Phoenix on Sunday.

But Melbourne skipper Chris Goulding said his side wouldn't let the equation distract from their goal of beating the Phoenix.

Melbourne kept their finals hopes in their own hands by beating the third-placed Cairns Taipans 99-83 at Melbourne Arena on Thursday night and their late flurry of points which pushed the margin to 16 points could be what sends them into fourth place. 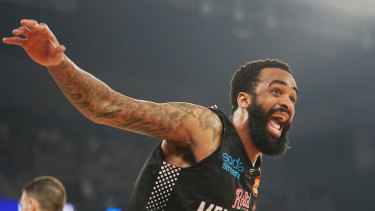 United's win means they join New Zealand Breakers and Brisbane Bullets on 14-13 records, but only one of them can finish fourth and make the finals.

The Breakers were scheduled to play their final game of the regular season against the Phoenix in Christchurch on Friday night and if they beat the undermanned Phoenix by a big margin it will mean United will likely need a big win on Sunday.

The Bullets have the worst percentage of the three teams and have the hardest match-up with the Taipans facing them in Brisbane on Saturday night with the Bullets likely to need a sizeable win to have any chance.

"We are in a good position because we will know exactly what we need," Goulding said after top-scoring with 23 points in the win.

"I don't know all the numbers and all that. We are just hoping that we will need a good, solid win.

"Once again our season will be on the line. This win doesn't guarantee anything, it just puts us in position to keep fighting.

"You can't pencil in any wins, previously this year you might say, 'They will get that game' and that's where we have faulted.

Taipans coach Mike Kelly said he hadn't finalised plans to sit any of his main players for the Bullets game.

Big-minute players such as import Cam Oliver are only young players so aren't feeling the strain, especially with the NBL pausing for 10 days for the FIBA Asia Cup qualifiers after this round.

"If guys need rest we will give them rest," Kelly said.

"Scotty Machado and DJ Newbill, also high-minute guys, have been the same.

"We want to play. We want to win the game and that's how we will be thinking against Brisbane."

Capitals back Maddison Rocci to be ‘elite’ WNBL player

United chase percentage, luck with finals destiny out of their hands