Sydney Kings coach Will Weaver has fired an ominous warning to the rest of the NBL, saying his ladder-leading outfit still has plenty of improvement left in them.

Weaver's side exacted revenge on Melbourne United on Sunday when they pummelled their arch rivals 111-101 at Qudos Bank Arena. 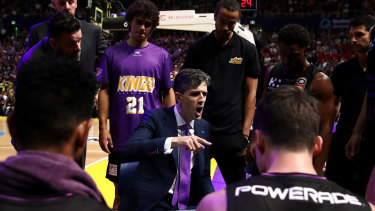 Will Weaver talks to his team during a time-out during the Kings’ impressive defeat of Melbourne United at Qudos Bank Arena.Credit:Getty

The emphatic victory not only kept the Kings' perfect record at home intact, but improved their remarkable record to 11 wins from their opening 12 games.

Furthermore, the 111 points broke a franchise record in the 40-minute era, and their 61-point first-half is the highest of any team this season.

But none of those achievements impressed their rookie coach, who was quick to point out their struggles from long-range against United.

"I just don't care," Weaver said of his team's historic mark for a single-game.

"I like that we're becoming a little bit more efficient offensively. I think the work these guys are putting into it is showing. Maybe it's a landmark of that.

"But I just feel like, 32 per cent from the three is almost certain to be below our team average when it's all said and done. If anything, I want more. I expect more. 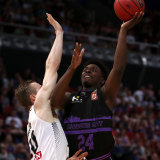 "I imagine that we'll beat that [total] a couple more times this year."

Star guard Casper Ware, who led the Kings with a team-high 27 points off an efficient 9-14 shooting, echoed his coach's subdued analysis of their display.

"I think this is as close as we got to playing a whole 40-minute game. There wasn't too many lows during this game, but we can get better," Ware said.

"That's the scary thing about it.

"We could fix a few things [for the] finals, where it might hurt us … we've got a lot of winners on this team and we know it's just the regular season."

Ware's comments come in the same round their nearest rivals suffered losses.

The Kings' lopsided victory over Melbourne came just hours before second-placed Perth were upset by Adelaide 99-88 on their home court.

United lost two games across the weekend, having also been stunned by Cairns 93-86 courtesy of a double-double from Cameron Oliver (26 points, 13 rebounds).

For these friends, rivalry will come to life at tip-off

Phoenix told to lift or lose in Monday clash with Sixers