“From this moment on, everything is possible, man.”

There is a new world IBF, WBO and WBA champion, one who exposed a lack of speed in Joshua, according to Costello.

Here, with some extra analysis from Warren, the 5 Live boxing team unpick the fallout from the weekend’s shock result and look to the future.

Where was AJ’s anger?

After seven rounds, a knockdown of his own and four from Ruiz, Joshua retired to his dressing room. In the ring he had been sportsmanlike, prompting 5 Live’s ringside pundit Carl Frampton to call for a show of anger.

Bunce: “Joshua said ‘what a great fight’ in the ring afterwards, a bizarre statement on a night I still can’t really believe.

“There are so many bits of it that are shocking, so many moments that there are no explanation for. I don’t really know what happened in rounds four, five, six, when I will suggest Joshua had no idea where he was after being down twice in the third. He wouldn’t be the first fighter to vanish in a fight.”

Warren: “After the fight, he didn’t seem very upset at losing his title. I was very disappointed. I’m not saying you should be a bad sportsman, but it was like he was relieved to get out of there.” 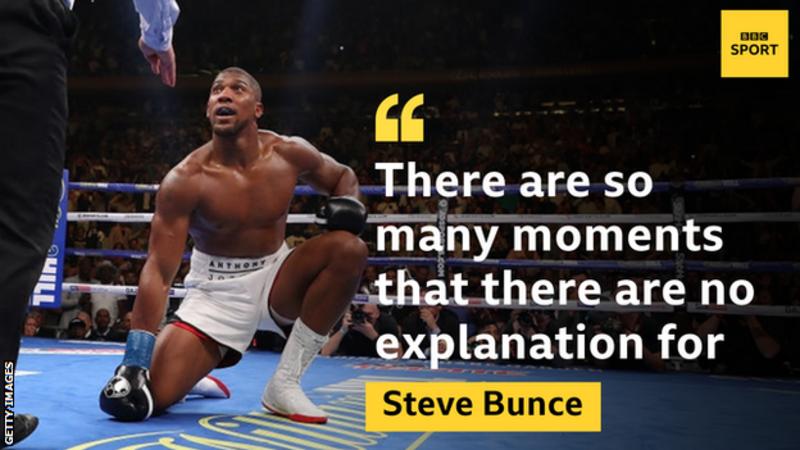 Joshua pays for lack of speed

And get out of there he did. At first, his post-fight media duties were postponed under doctor’s orders, only for Joshua to then insist he would carry them out following the first loss of his 23-fight career. Ringside, 5 Live pundit David Haye said the Briton’s “invincibility” had now gone and others pointed to shortcomings.

Costello: “Something that struck me at the open workout on Tuesday was how slow Joshua looked. I thought it was just a case of his trainer Rob McCracken saying, ‘do as little as you can for the cameras’. I overlooked it.

“When Ruiz lost to Joseph Parker in 2016, he would throw a flurry, calm down, slow down and lull Parker into a sense of safety. When he did attack, there were razor sharp punches. There was more here; speed was the absolute key.”

Warren: “I was surprised it was Ruiz who did it. Joshua is easy to hit. His defence is pretty awful and it hasn’t improved at all since he turned professional.

“When he was an amateur, I thought he was outstanding, but as a professional they have not really worked hard on his defence. He’s wobbled in the past four or five fights and this guy – who’s got fast hands – totally exposed him.” 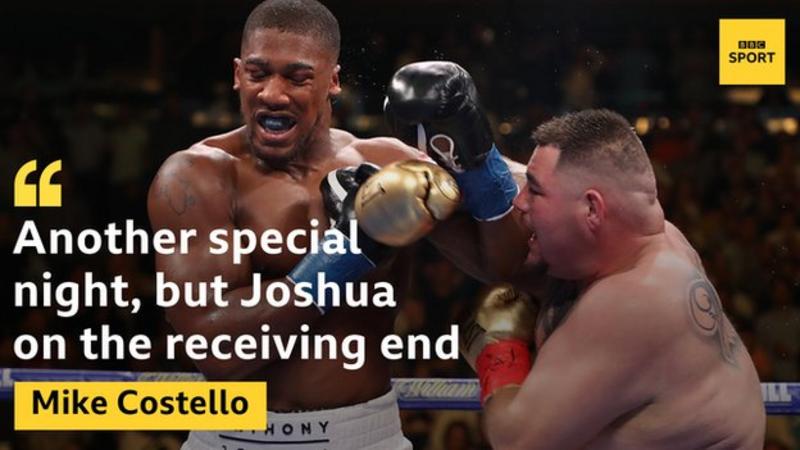 Anyone for Los Angeles?

It is now down to Joshua to take up his rematch option and it is almost certain he will, with a bout slated for late in the year. First he must get over the shock of losing to an opponent who took the bout at short notice. Bunce said Joshua could not hide his feelings when he interviewed the fighter outside his dressing room.

Bunce: “His face was fairly sad, to be honest with you. There were 30 people around us who were very unhappy. He was hurt and it will hit him. I wouldn’t be at all surprised if he stays in a darkened room for a few days.

“Don’t be at all surprised, if we got to the Staples Center in Los Angeles, for Ruiz’s people to fill it – or Las Vegas. I’m convinced it’s a rematch in LA or Las Vegas and I would be stunned if the people advising Ruiz advise him not to take it.”

Costello: “It sounded as if he was putting a brave face on it when he spoke to Steve. Just to paint a picture of the scene for people, I was at a door at one end of his dressing room, Steve at the other. In the time we were there, one of the Matchroom Boxing staff came along carrying his belts, which of course he now no longer owns.”

Warren: “The problem is that once he gets in the ring and the bell goes, that chin of his is exposed.

“I’ve got to be honest, I would be very surprised if the outcome was any different. Ruiz will take a lot of confidence from the way he won the fight. He showed that he is a true warrior himself. AJ caught him with a real good shot when he went down, but he got up and put him down twice.

“I think this fella will be better with a bit more preparation and it’s going to be a different proposition.” 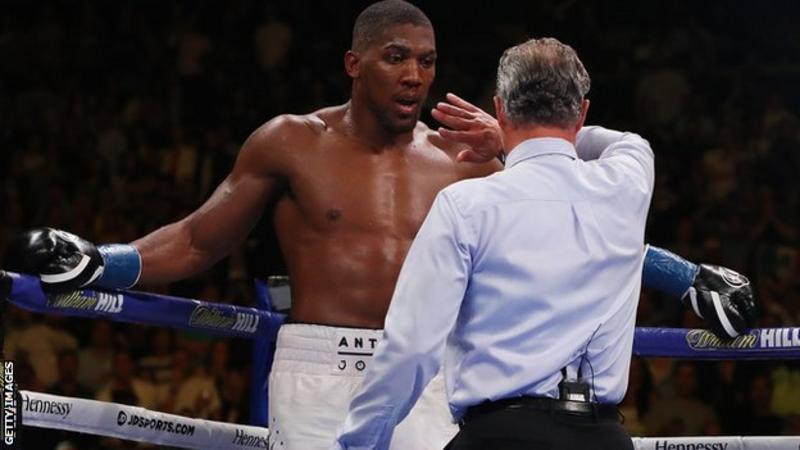 Respond by being visible

Before the seventh and final round played out, Joshua asked his trainer “why do I feel like this?” There have been whispers he was unwell, though he made no reference to that himself. His promoter Eddie Hearn emphasised a rematch is “must-win” for his career, so how does the former champion respond?

Bunce: “The key is to get out there to the coalface early. Get back on TV soon, get out and about, sit down with people and be accessible with a charm offensive.

“He won’t make excuses and he can meet and face his critics and put his case for a rematch. He will come out of it with more grannies who love him than he has now. If he vanishes, that, I think, could hurt him.”

Warren: “He will go on a charm offensive. Where he’s been corporate and inaccessible to the public, suddenly you’ll find he’s a very accessible person and they will try to do a repackaging job.

“He doesn’t look in good condition. When you think Anthony Joshua has been training with Navy Seals, he’s in the ring with a guy who looks like a beached whale and did an absolute job on him.”

Costello: “I always said Joshua was the type who could ride the tackle when he lost, that he could handle it. But I said that not figuring it would be Ruiz. I figured it would be Fury or maybe Deontay Wilder and he would make a story of redeeming himself in a rematch.” 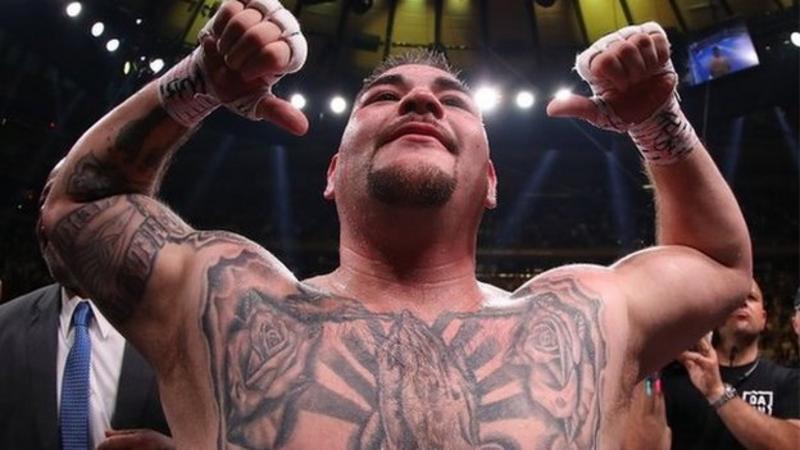 Ruiz overcame the 1-25 favourite in convincing fashion and pointed to back-to-back training camps as a key factor given he fought as recently as 20 April. In one night, his profile has been transformed from being an overweight easy touch for Joshua to a dangerous champion.

Bunce: “If he went on a six-month regime, he will still not look like the worst version of Joshua. That’s just the body attached to Ruiz.

“But here he came in heavier again. Maybe that’s why previous trainers parted ways with him. Maybe they were exasperated.”

Warren: “I don’t think he’d be a problem for Tyson Fury. He’s got built-in endurance and fast hands but he’s not carved out of marble. Muscles don’t make you a great fighter.”

Costello: “Ruiz has now been trained by Freddie Roach, Abel Sanchez and Manny Robles. Big names. They wouldn’t work with a waste of time.

“It was a special performance and justice was done as the referee massively gave Joshua the benefit of the doubt at the end of the third round.

“We have seen another special night, this time with Joshua on the receiving end.”

Joshua vs Ruiz result: Deontay Wilder says AJ ‘wasn’t a true champion’ as he criticises Joshua for defeat to Ruiz