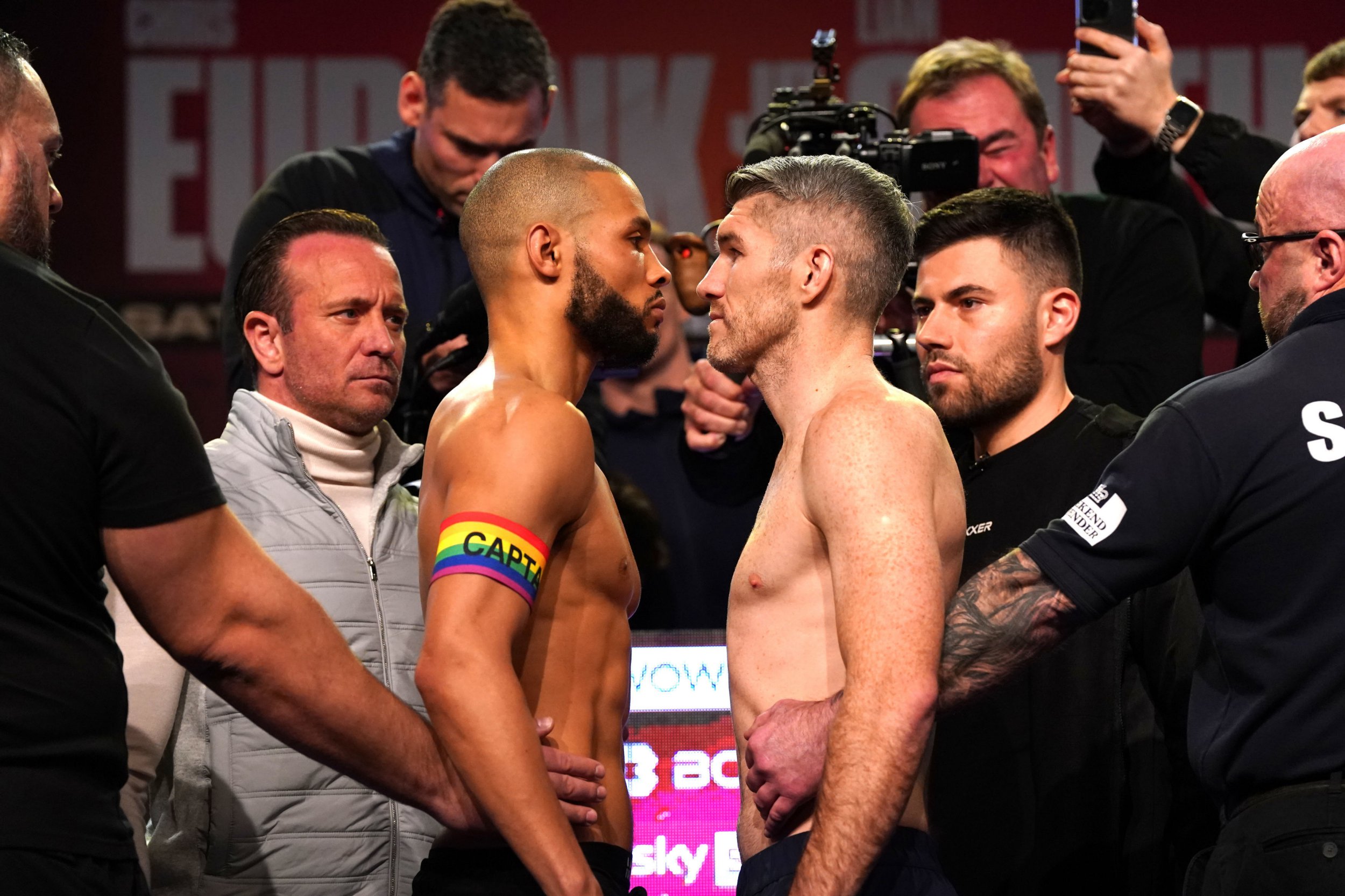 Chris Eubank Jr sported a rainbow armband following his unpleasant exchange with Liam Smith as the pair came in under the middleweight limit for Saturday night’s grudge bout.

Eubank Jr, who responded with unsubstantiated claims about Smith’s fidelity to his wife, pointedly wore a pro-LGBT armband at Friday’s weigh-in ahead of a much-anticipated bout at Manchester’s AO Arena.

He kept the accessory on throughout a frosty and protracted staredown with Smith which passed off without incident after the pair had both scaled 11st 5lbs – one pound below the middleweight cut-off.

While Eubank Jr and Smith have apologised for their conduct, the matter may rumble on beyond this weekend as the British Boxing Board of Control said it is ‘considering the conduct’ of the fighters.

Eubank Jr wrote on Twitter afterwards: ‘We don’t discriminate… we don’t alienate. We want boxing & sport as a whole, to be all inclusive.’

The slanging match has cast another unwanted shadow over the sport in this country, just a few months on from Conor Benn failing two drugs tests which nixed a catchweight fight against Eubank Jr.

While Benn insisted he is innocent and ‘the truth will soon come out’, public perception seems to have shifted in favour of Eubank Jr, so often a pantomime villain in the build-up to and during fights.

‘I guess the shift would be the online stuff more than anything. You do see more positive comments, you do see ‘I used do be a Benn fan and not like Eubank but now I’m Team Eubank’, which is great.

‘But I don’t know if I’m going to get booed into the arena or cheered on Saturday night. I’m interested to find out.’

Eubank Jr, at 33 a year younger than Smith, has spent his career campaigning at middleweight and super-middleweight and only lost to British compatriots Billy Joe Saunders and George Groves respectively.

While he has fallen short at world level in the past, Eubank Jr feels he is ripe for another tilt at the top level and that Smith, a former sparring partner, is below that level.

Eubank Jr added: ‘He’s a good fighter, not a great fighter. You have to be great to beat me. Beating Liam Smith will put me in a firm position to challenge for world titles and the big names.’