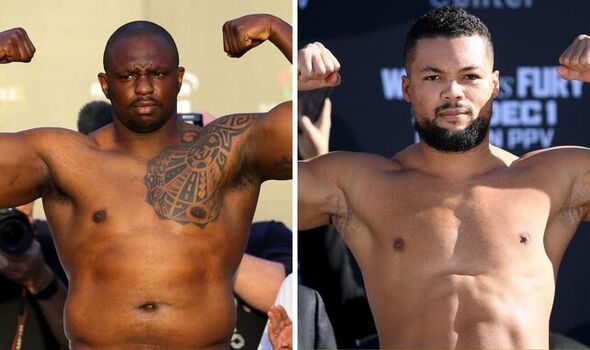 Joe Joyce wants to fight Dillian Whyte next and has ridiculed ‘The Body Snatcher’ for his knockout loss to Tyson Fury in April. ‘The Juggernaut’ is set to face Christian Hammer on July 2 but is already lining up his next bout as he awaits his mandatory shot at the WBO heavyweight title.

In an interview with The Sun, Joyce weighed in on his options and revealed Whyte is in the running. He said: “Whyte was outclassed by Tyson Fury, he landed about three punches on him. We all know how he loves being a mandatory — he was mandatory for 7,000 days. Well, come and fight me and you get the chance to be mandatory again!”

Another name on Joyce’s lips was Joseph Parker. The pair were originally set to face each other in July, and then September, but negotiations seem to have hit a snag after Parker signed a long-term deal with BOXXER and Sky Sports. Parker’s representatives have since come out to note that he hadn’t signed a bout agreement with Joyce and that they were more interested in a rematch with Whyte.

Talking to the same publication Joyce stated that Parker had ‘bottled it’. He said: “Parker ducked me. Why would you sign with another promoter if you actually want the fight? He bottled it ­— plain and simple.”

Joyce is ranked No 1 by the WBO and is currently sitting in limbo awaiting his mandatory title shot. Anthony Joshua and Oleksandr Usyk will fight for the WBO, IBF, and WBA titles on August 20 but Joyce may have to wait behind WBA mandatory challenger Daniel Dubois, and the winner of the IBF final eliminator between Zhang Zhilei and Filip Hrgovic for his shot at the world titles.

At present, WBC champion Fury is retired although he continues to keep hold of his belt. Reports suggest that Fury will step back into the ring to face Joshua if he beats Usyk, adding further delays to Joyce’s plans. But ‘The Juggernaut’s’ prayers may be answered if Fury’s US promoter, Bob Arum has his way.

The Top Rank CEO has expressed desires for Fury to unretire and face Joyce in a massive stadium fight for the green belt.

“He’s going to fight, he’s a fighting man, and I expect Tyson Fury back in the ring before the end of the year. I think if Joe Joyce wins his fight in early July, Tyson Fury and Joyce at Wembley at the beginning of October will do as well if not better – I don’t know how you can do better – as well as the Dillian Whyte fight with Tyson Fury,” Arum told Queensberry Promotions.

“That will lead to a Fury fight against the winner of Joshua and Usyk. I’ll do the best I can to make sure that fight takes place in the UK because I don’t think it’s good for boxing to have a fight like that and putting it in Saudi Arabia.”