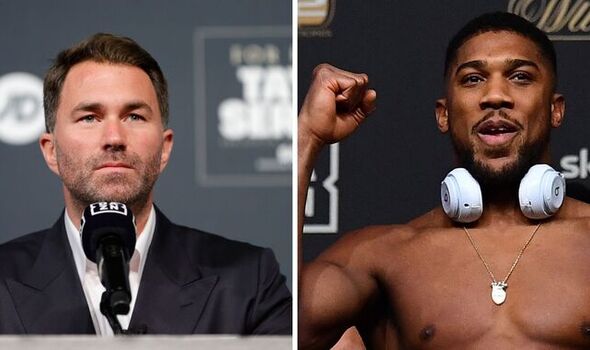 Anthony Joshua’s promoter Eddie Hearn believes AJ will knock out Oleksandr Usyk in their upcoming second fight. Joshua suffered his second career defeat in September last year when he was outpointed by Usyk at the Tottenham Hotspur Stadium.

The Brit lost his WBA ‘Super’, WBO, and IBF world heavyweight titles in fairly convincing fashion, but despite this fact, Hearn remains adamant that Joshua will get it right in the rematch. During a Q&A on Instagram, Hearn told fans: “I’m telling you now, AJ KOs Usyk within six rounds. I rate Usyk but I believe in Anthony Joshua and I believe he’s going to put it right in the rematch, I really do.”

For the rematch, Anthony Joshua has reportedly replaced long-time trainer Robert McCracken with boxing writers’ 2012 Trainer of the Year, Robert Garcia. Garcia, known for his effective game plans, is expected to change Joshua’s approach for the rematch after the Brit was criticised for not exerting his size and power enough in the original fight.

The rematch is expected to take place on July 23, but according to Hearn, it may be delayed till mid-august to ensure the fight is promoted properly.

Joshua could fight Fury this December despite Gypsy King’s retirement

“We are close to announcing AJ’s next fight,” Hearn said in the same Instagram live. “If you watched my Kugan Cassius interview yesterday you would have seen there was a slight delay, but the news is coming very soon.”

“We have agreed to a deal for the site, and the working date of July 23. We are pretty much ready to announce. When you question about whether there will be a delay. If there is, you’re talking about two weeks, and it’s for no other reason than time to make sure we can promote the fight in the right way.

Saudi Arabia is believed to be the destination for the super fight, however, the exact venue is yet to be confirmed. It would be Usyk’s first time fighting in the Middle East and Joshua’s second having regained his titles at the Diriyah Arena in Diriyah, Saudi Arabia when he defeated Andy Ruiz Jr at the second time of asking.