Jeff Fenech says “boxing is a better sport” after one of the great sporting injustices was finally set right.

Fenech has been retroactively awarded a fourth world title after the World Boxing Council [WBC] overturned the controversial draw in his first fight against Azumah Nelson in 1991. The decision to award the bout and belt to Fenech came at the WBC convention in Acapulco, Mexico, more than three decades after the original decision.

Fenech, already considered one of the greatest boxers Australia has produced, was presented with his belt by legends Roberto Duran, Julio Cesar Chavez and Miguel Cotto.

“I can’t put it into words. I couldn’t speak when it happened,” Fenech told the Herald and the Age from Mexico.

“It feels even greater tonight because of the three legends who presented my belt to me. I won, I’ve known that for 30 years. It’s a long time coming.” 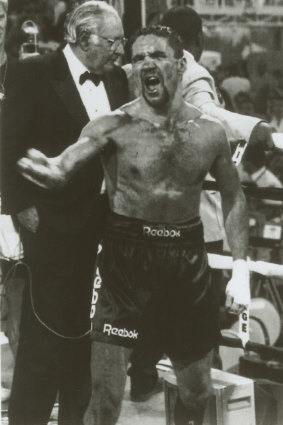 A furious Jeff Fenech after the decision was read out in Las Vegas.Credit:AP

Fenech dominated Nelson in their first fight in Las Vegas, but one judge scored the bout a draw and the other two were split. It meant Fenech missed out on the WBC super-featherweight title.

A philosophical Fenech said there was an upside to the heartbreaking result.

“It happened for a reason and made me a better person,” Fenech said. “I was a three-time world champion and didn’t like the person who I was.

“If I was a four-time world champion and undefeated, I would have been [a lesser man].

“When you have that sort of success, you get a big head and I had that. I wasn’t the same, I was different. Fame and fortune changes you.”

Fenech, who is celebrating the result with his wife Suzee and a contingent of Australians including boxer Jason Moloney, said he never expected the decision to be overturned.

“I never thought this would happen,” he said. “Everything happens for a reason. This makes boxing a better sport.