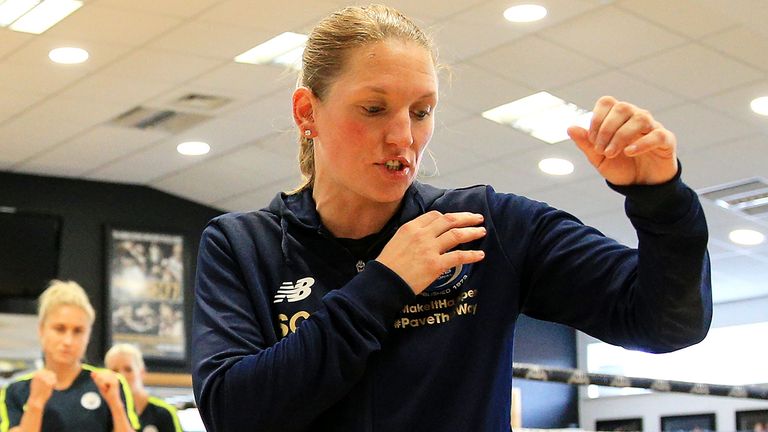 Stacey Copeland has announced her retirement from competitive sport due to ongoing injury problems.

Copeland made history in 2018 when she became the first British female boxer to win the Commonwealth title after she defeated Mapule Ngubane in Zimbabwe.

She represented her country in both boxing and football, having been called up to the England under 18s in addition to playing for Doncaster Belles and Tranmere before opting to commit to boxing.

The 39-year-old announced her retirement on social media, stating that the decision was forced upon her sooner than she had hoped.

Copeland said: “The time has come for me to retire from professional sport. This most definitely is not on my terms, but my body cannot overcome the damage done over the years.

The time has come for me to retire from sport. I’ve shared a few words here & also my ‘letter to sport’ in the link below ✍️
Life will never be the same, but I’ll still always try to make a positive difference. I’ve had great support, thank you so much ❤️https://t.co/iRwkJX98dn pic.twitter.com/5QdZy265e0

“Last May I was on crutches for the third time in 12 months and the doctors confirmed my worst fears. Surgery lays ahead to help me long term but meanwhile I need to look after my body for once.

“I had dreams left to fulfil, which I fully believed I could accomplish and wanted with every bit of me, so it’s a horrible feeling to have to stop.

“I’ll be forever grateful to all of you, but also to sport for being the most fantastic rollercoaster ride, the biggest thrill, the wisest teacher, the scariest dare, the most exciting journey and the greatest gift to receive as a little kid filled with energy, passion and big dreams.

“What won’t change is that I’ll continue to try to positively impact others and make a difference.”

Joshua vs Ruiz result: Deontay Wilder says AJ ‘wasn’t a true champion’ as he criticises Joshua for defeat to Ruiz