It was gratifying to hear Tim Tszyu and his team making all the right noises after his fifth-round stoppage of Dennis Hogan on Wednesday night.

There was no grandiose call out of big names, no putting the super welterweight division on notice, no proclamation of greatness. Tszyu took care of his business in a vicious fashion, then made it clear he felt like he had barely scratched the surface of what he hopes to achieve. 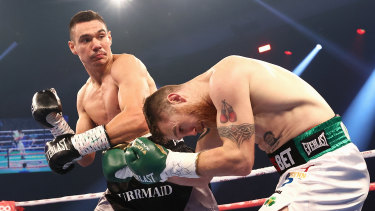 Tim Tszyu demolished Dennis Hogan but there are parts of his game he needs to sharpen before any title assault.Credit:Getty

Suffice to say, boxing never often follows the path of least resistance and Tszyu might be a long time inactive if he waits and watches and hopes to try and clean up four belts in his first world title shot.

There are options in the meantime, some domestically, more internationally. Now he starts the delicate dance of protecting his record while honing his skills; taking a risk but not too much of a risk. That’s always been the game.

First, the local fare, which pretty much now starts and finishes with Michael Zerafa. He’s a good boxer but it’s impossible not to get the feeling that Tszyu is ready for more, wants more and needs more. Another local fight would see him campaign at a similar level, then perhaps jump to world title grade, which has been the undoing of more than a few Australian contenders.

What he really needs, short of a title shot, is an international name with respect and appeal, perhaps Liam Smith, the tough Brit, or even a veteran like Cuban-American Erislandy Lara. But the only way to really win the American market is to win a title or beat an American fighter, so names like Jarrett Hurd and Erickson Lubin come into the frame.

Any of those boxers represent a solid lift for Tszyu, whose win over Hogan was greeted with enthusiasm overseas but also some caution. Tszyu looked a little loose and wild against the Irishman, missing with some big shots when he’s previously shown he can box with accuracy and precision.

Perhaps it was simply that he wanted Hogan out of there and he wanted to add another style to his resume. He clearly had less than zero respect for Hogan’s power and didn’t feel like Hogan could land any meaningful counters, hence the laissez-faire offence.

But it wasn’t lost on educated observers that a better opponent would have had the chance to land some meaningful shots on Tszyu if he was uncharacteristically loose in the future. That means improvement is still to come and we all know by know that is arriving in bulk each and every time we see him in the ring.

Will he be a world champion? That’s a good bet. Is he ready for a world title shot right now? He’s certainly taken giant strides in the past two years… but a better test, on the road would be even better for his boxing education, would be preferable.

Good things come to those who wait. Tszyu and his handlers shouldn’t rush into planning the next step. Any misadventure on the way up can see boxers go straight back to the bottom of the pile.

KSI vs Logan Paul 2: Devin Haney to show the world he is one of the best

Anthony Joshua vs Kubrat Pulev to be postponed due to coronavirus? ‘We’re in the s**t!’