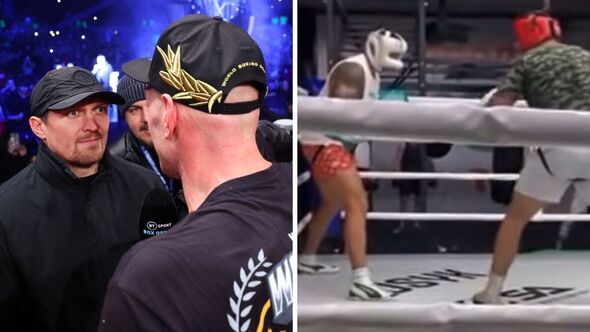 British heavyweight Dave Allen revealed that he has been promised to be brought in as one of Oleksandr Usyk’s sparring partners for the Tyson Fury fight. The White Rhino says that Usyk’s team think he is ‘stylistically perfect’ for Fury despite the gulf in class.

During his 10 year-stint as a professional, Allen has quickly become one of British boxings biggest cult heroes and is known for his all-action style of fighting. The Doncaster boxer retired from the sport after being knocked out on his feet during a sparring session with Usyk back in 2020 but has since returned to the ring.

Posting a video of the worrying moment to his social media, Allen wrote underneath: “I never went over, I finished the round. But I can remember him hitting me. The rest of the round – next thing I knew I was stood outside the ring, packing my bag.

“I was concussed, so that was the last straw. I’m not an idiot so I know when it’s time to finish. Yeah, a lot of money could’ve been made, but at what cost? Being embarrassed. Being hurt is one thing, but being embarrassed is another.”

However, Allen is expecting to return to Usyk’s camp for the undisputed fight, and could give the Ukrainian some inside information on the Gypsy King, having spent time around his camps.

“You know Usyk, they did tell me that if they fought Fury I would be brought over because stylistically I’m perfect for Fury so that tells you how I box in the gym compared to how I fight in the ring don’t it,” he told Boxing UK. “So, they said I’d be a perfect one for Fury.

“So, if that fight does end up happening that will be two interesting phone calls. One from them to me and another from me to Tyson saying ‘I’m going over to Ukraine if you don’t mind’.”

Negotiations for Usyk vs Fury are coming into the final stages with an official confirmation of the date and venue expected in the coming weeks. According to Usyk’s promoter, Alexander Krassyuk, the fight is being targeted for some time between February 18 and March 4 with the Middle East being the most likely destination.

Wembley and Cardiff’s Principality Stadium have been mentioned as potential backup options if a fight can’t be made overseas, although it is understood that organisers are in talks with three Middle Eastern countries about hosting the historic event.