Jai Hindley is on course to become the first Australian to win the Giro d’Italia after stealing the race lead from Richard Carapaz with a blistering attack and masterful team tactics during the penultimate stage on Saturday.

The 26-year-old started stage 20 on Saturday trailing Carapaz by a mere three seconds but now has a healthy one minute and 25 second advantage on the Ecuadorian heading into Sunday’s final stage – a 17.4km time trial in Verona.

“I knew this was going to be the crucial stage of the race with the finish, I knew it was a brutal finish,” Hindley said post-race.

“If you had the legs then you could make a difference here. We stayed patient, and we really just saved our matches until today and actually, it was perfect.” 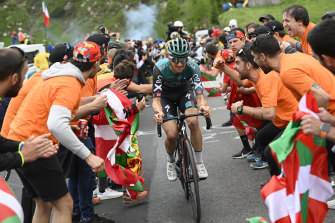 Jai Hindley on the road to the race lead. Credit:LaPresse

Hindley pushed himself so hard to distance Olympic gold medallist Carapaz (Ineos Grenadiers) in what was the final showdown in the high mountains that he initially couldn’t respond to Bora-hansgrohe teammate Lennard Kamna when he congratulated him at the end of the 167-kilometre trek to Marmolada.

“I said ‘great job’ but he’s so on the limit he couldn’t react,” Kamna told Eurosport. “I think he needs a few minutes to realise what happened and also to take a breath because he went probably completely over his limit.” 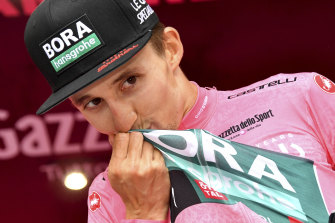 Pretty in pink: Jai Hindley wears the leader’s jersey on the podium. Credit:LaPresse

Italy’s Alessandro Covi (UAE Emirates) celebrated a solo victory on the summit finish, but attention was turned to what was ensuing behind him when Hindley made his first move with about 2.5km remaining and, with Carapaz on his wheel, distanced the main group of title favourites including Mikel Landa (Bahrain Victorious).

Carapaz, missing his key support rider Australian Richie Porte who was forced to withdraw from the race on Friday due to illness, was isolated, having used all his teammates. However, Hindley was able to call upon Kamna, who having spent the day further up the road in the breakaway, dropped back to help his leader.

“He couldn’t have timed it better to drop back and give me a boost up the road,” Hindley said.

Kamna paced Hindley along the upper slopes of the Passo Fedaia, setting a tempo that Carapaz could not sustain. The 2019 Giro champion began to crack with 1.9km remaining when he lost the wheel of Hindley, who took full advantage of his rival’s moment of weakness and powered ahead to finish the stage in sixth place.

“When I heard Carapaz was dropping the wheel, I just went all out,” Hindley said.

Hindley has been in this position before. At the 2020 Giro d’Italia he assumed the pink leader’s jersey – or maglia rosa – at the end of the penultimate stage via a countback only to lose it in the time trial the following day. However, his advantage this season is a lot healthier and, as he told The Age at the beginning of this week, he has not raced for three weeks to “put socks on centipedes”.

“It’s always hard to say how a time trial is going to go on the last day of a three-week race, but I will die for the jersey tomorrow,” Hindley said.

“It’s the most beautiful jersey in cycling in my opinion. It’s a privilege and an honour to wear this again.”

The climber from Perth had compared Sunday’s time trial route to the one he contested at the 2019 Giro, when he made his race debut and Carapaz, 28, won the title. The pair weren’t competing for the same things then but were still close on the stage standings, with Hindley finishing only six seconds behind.

“It’s not over, there’s a hard day tomorrow, and I’m going to give it everything in the time trial,” he said.

Landa is currently third on general classification and 1:51 behind Hindley, who after a 2021 season marred by illness and injury hit the “reset” button and joined Bora-hansgrohe this year.

“I didn’t know if I was ever going to be back in the pink jersey again after two years,” Hindley said.

“It was a bumpy road back here. I didn’t know if I was going to get a chance to wear this again, but it’s just an incredible feeling.”