Caleb Ewan is set to compete at the Tour de France and Giro d'Italia despite a tight 13-day turnaround between the three-week competitions, in a bold endeavour to lay claim to being the best sprinter in cycling.

The WorldTour season re-commenced on August 1 with a condensed calendar following an almost five-month shutdown due to the coronavirus pandemic.

Saturday's 298-kilometre Milan-San Remo classic, the Tour and the Giro remain Ewan's major season objectives despite the onerous timing and a lack of race conditioning. 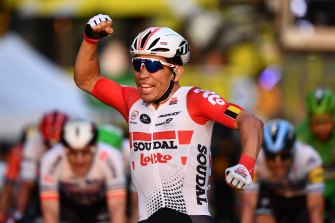 The Tour was postponed to August 29, with the Giro to follow instead of precede the race in which Ewan on debut last year proved the fastest sprinter and most prolific stage winner with three victories, including line honours on the Champs Elysees.

"I'm not going to feel that fresh after the Tour and then I'm going to go into probably a harder sprint competition at the Giro."

The 26-year-old believes the interim period will be crucial to his chances against a stacked sprint field at the Giro.

"I'd need to keep my body going because it shuts down very quickly, especially after a Grand Tour. After the Tour last year, I took too much time off and could never come back from it for the rest of the season," he said.

"I'll be a bit more focused and switched on if I'm doing the Tour and the Giro."

Ewan resumed his season with second place at Milano-Torino on Wednesday in a precursor to Milan-San Remo where he'll share leadership with Lotto Soudal teammate Philippe Gilbert.

"It takes a little bit of pressure off me that the team's focus is not just on me because the weather conditions change my chances," Ewan said.

The Monument normally held in the European spring will follow a rejigged route that heads inland before returning to the traditional coastal finish, including the Cipressa and Poggio climbs that may separate the bunch, depending on how the race is run.

"Usually at this time of year the wind is coming in from the sea, which means it's going to be tailwind up the climbs. If there is going to be wind, I hope it's coming from the front, not the back, because when it's tailwind it will be quite hard," Ewan said.

"I hope it goes the sprinters' way this year. If I can win that I can retire happily." 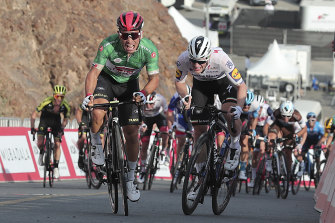 Ewan took a temporary 30 per cent pay cut during the shutdown and under Monaco lockdown was unable to train outside for a stint. Yet he is confident about his form, referring to early season results, including two stage wins at Tour Down Under and an uphill sprint victory at the UAE Tour.

"It's going to be a benefit that I was forced to stay inside because otherwise it would have been five months of training and you don't need it. Two-and-a-half to three months is plenty," he said.

"I feel like this year maybe I've stepped up a level. By the time the Tour comes, I'll be ready to go again."