There are two sides of the Tour de France: what you see on TV and read about every July, and what cycling’s biggest, most prestigious, stressful race is really like.

Some people watch it for the scenery, the centuries-old chateaus, the countryside that on the ground smells sweet, and exuberant roadside fans, who wait all day in the elements to see a few minutes of action unfold inches from where they stand. 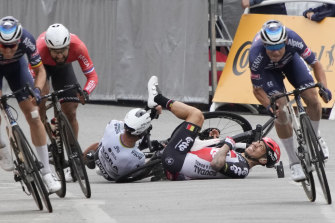 Crashes are inevitable at the Tour, especially in the first week when the peloton is fresh and nervous. Credit:AP

The five to six helicopters which hover low over the peloton (the field) every day broadcast images of the merciless three-week race that traverses across France and neighbouring nations like a moving circus, which generates enough noise to make your ears ring.

Inside the Tour is far less glamorous. Crashes are an inevitable part of it, especially in the first week when riders are fresh, nervous and the pecking order hasn’t been established. And no one stays in those chateaus. Not even in the multi-millionaires in the bunch. The unique logistics of the race means hotels are more often than not basic, sometimes less than basic, and twin-share accommodation is the norm. Between that, competition, and the daily travel from stage to stage in a team bus, alone time is rare.

The peloton for this year’s Tour will consist of 176 riders divided into 23 teams each comprising eight cyclists.

The July 1-24 spectacle will see the peloton race a total of 3349.8 kilometres across 21 stages, or days of competition, with only three “rest days” separating those. Rest days don’t really allow for respite though, they’re typically filled with press conferences or long transfers to the next destination. “Rest” infers the riders don’t compete. The Tour, which starts in Copenhagen this year, will have an additional rest day, three in total, to allow the convoy to travel from Denmark to France after stage three, with stage four commencing in Dunkirk on July 5.

There is no let up at the Tour, no opportunity to go home and reset for the next match if you’re having a bad mental health day, no substitutions if you’re injured or ill. If a rider doesn’t start a stage and finish it within the time limit, they’re out, which can be gutting given preparations for the world’s most gruelling annual sporting event start anywhere from 12 to six months out from the grand depart, or first stage, with concerted training camps and lead-up races commencing about three months out. Teams typically consist of one to three leaders, tasked with winning, with the rest assigned to support them.

As Australia’s only Tour champion, Cadel Evans says, the best of the best – at their best – are selected to compete. Each stage is the equivalent in level, expectation and pressure of an AFL premiership, NRL grand final or Super Bowl, though subject to global adulation and ridicule.

Weight is a huge performance gain at the Tour, and competitors, with their bowed limbs can walk a fine line between being lithe enough to compete, and underweight. Some teams now have apps that tell riders how much and when they need to eat, to help manage this and ensure they replenish the thousands of calories burned daily.

So prestigious is the Tour, with a total prizemoney pool of €2,282,000 ($3,285,701), that riders will persevere through injuries – fractured ribs, pelvises, shoulders, broken arms, road rash so red raw they can’t sleep on it – that in any other race they’d logically succumb to and abandon. There is a no-needle policy in cycling too, so the best pain relief you’re going to get is something like paracetamol.

This year a total of 450 support staff, consisting of managers, sports directors, coaches, chefs, masseurs, carers (known as soigneurs) and mechanics employed by every team will work at the Tour. Sports directors drive behind the peloton in team cars with spare bikes strapped to the roof on every stage, conveying messages and instructions to their riders via race radio, ready to sharply accelerate to the front, or suddenly brake, if one of their racers is involved in a crash or has a mechanical.

The 2022 Tour route consists of two individual time trials, where riders one by one race point to point against the clock, with the fastest winning the stage. In addition to that is six flat stages where the entire peloton will arrive at the finish line together and the sprinters, like Australian Caleb Ewan, Sam Bennett, Dylan Groenewegen and Fabio Jakobsen, will be positioned at the front, hitting speeds of up to 70 km/h to contest for the win.

There are seven hilly stages, which suits the likes of Australian Michael Matthews, Wout van Aert, Peter Sagan and world champion Julian Alaphilippe, who are not as fast as pure sprinters such as Ewan but have a quick turn of speed and can also climb well on undulating terrain and uphill drags. 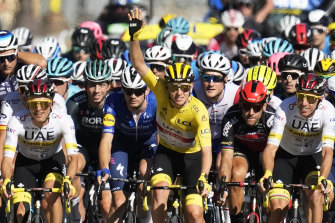 Six mountain stages, taking in the Vosges, Alps, Massif Central and Pyrenees, where the title contenders will battle it out on ascents that transcend the clouds, also feature.

There are races within races on every stage of the Tour where riders and teams, with differing objectives, will vie for career-defining stage victories as well as play the long game, with a view to winning one or more of the following four overarching classifications.

Title contenders are all-rounders, able to climb the highest summits, time trial, and stay vigilant and safe elsewhere. They will sometimes sacrifice a stage win, with their yellow jersey ambitions in mind, playing the long game and choosing to instead mark rivals, or conserve energy and manage accumulative fatigue. 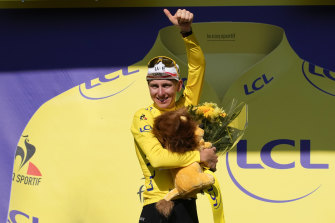 Tadej Pogacar on the podium in the yellow jersey. Credit:AP

The best way to collect maximum points, awarded on a descending scale, is to win stages. But points can also be accumulated on intermediate sprint primes positioned throughout the course. 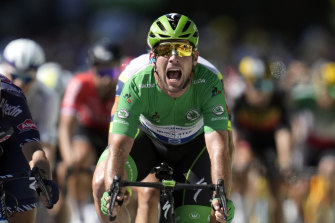 Mark Cavendish won the green jersey in 2021 but is not expected to be selected for the Tour this year. Credit:AP

Mountains classification (polka dot jersey)
The polka dot jersey is awarded to the climber who accumulates the most points from designated “KOM” primes on stages. Points awarded at each depend on the severity of the ascent. Climbs are categorised by a number, ranging from most to least difficult. Riders who crest the top first take the maximum points on offer. At Tour’s end, the overall winner of the classification is known as the “king of the mountains”. 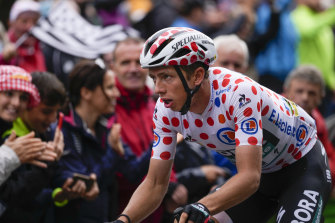 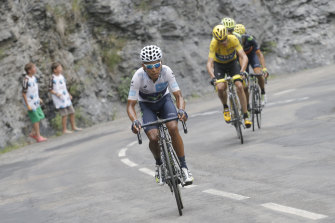 Nairo Quintana pictured in the white jersey at the 2015 Tour. Credit:AP

Coronavirus: Tour de France 2020 could go ahead without any fans