Australian cyclist Matthew Glaetzer has grabbed an emotional bronze medal at the UCI Track World Cup in his first race since being diagnosed with cancer.

Glaetzer finished third in the final of the men's keirin in Cambridge, New Zealand on Saturday, a result that was greeted with congratulations from team members and management given the battle facing the two-time world champion.

The 27-year-old was diagnosed with thyroid cancer in late October and underwent surgery to remove a tumour in his throat a month ago. 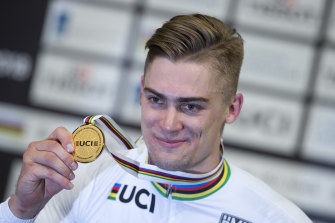 Matthew Glaetzer at the 2018 track world championships where he won gold in the men’s sprint. Credit:Peter Dejong

He has subsequently suffered from fatigue but never wavered in his commitment to return to competition at this week's meet, which serves as preparation for Tokyo 2020.

Glaetzer will also contest the World Cup meet in Brisbane next week before intensifying his treatment with radiotherapy.

A gold medal appeared possible after Glaetzer won each of his first two races but he found himself too far back entering the last lap of the six-rider final. He couldn't haul in Malaysian winner Azizulhasni Awang and Australian Olympian Shane Perkins, who now represents Russia.

Australia snared their first gold of the meet when Georgia Baker and Alexandra Manly cleared away to win the women's Madison. They finished on 42 points, 10 clear of second-placed Poland after leading for much of the 120-lap race.

The fastest qualifier, she had no answer to the speed of accomplished Russian Anastasia Voinova, who won their semi-final 2-0.

Australia have won six medals in Cambridge, including silvers to the two world champion pursuit teams on the opening night.