Hindley, who rides for Bora-Hansgrohe, edged out Romain Bardet (DSM) and overall favourite Richard Carapaz (Ineos) in a sprint to the line at the end of an arduous day of climbing. 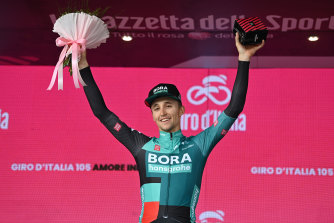 Jai Hindley celebrates on the podium after winning the ninth stage of the Giro d’Italia.Credit:AP

“I was just trying to survive as best I could, actually,” said Hindley, who was runner-up in the Giro in 2020.

“I knew it was flattening out in the last ks (kilometres) and there was a right-hander before the finish with around 200 to go. I wanted to take the corner first and then just gave it everything to the line, and yeah here we are.

“It’s pretty incredible. It wasn’t the easiest year I had last year. I worked so hard to get back to the level to compete at the Giro and I’m at a loss for words honestly. It’s pretty amazing.”

Lopez kept hold of the maglia rosa, the Spaniard finishing the 191-kilometre stage from Isernia 1 minute, 46 seconds behind Hindley. The stage saw several favourites lose time on the iconic final climb, which features double-digit gradients on a series of hairpins.

“This is wonderful for me – I don’t believe this moment,” the Trek–Segafredo rider said. “We need to enjoy every moment.”

Lopez is 12 seconds ahead of Almeida and 14 ahead of Bardet, with Carapaz just a second further back.

In addition to the Blockhaus, Sunday’s stage also included the top-category climb to Passo Lanciano and two other categorised ascents on a day boasting 5000 metres of climbing.

A nine-man breakaway led for most of the day, but they were pulled back and the peloton started the final climb together.

Carapaz tried to attack several times in the final five kilometres, but was unable to shake off his rivals for the stage win.

There was a worrying moment earlier in the day when Natnael Tesfatsion (Drone Hopper-Androni Giocattoli), who was leading the stage, crashed on the descent from Passo Lanciano. Tesfatsion misjudged a corner and somersaulted over his handlebars into the bushes.

However, the Eritrean received treatment from race doctors and was eventually able to continue.

The race has its second rest day on Monday before a 196-kilometre stage from Pescara to Jesi that traces the Adriatic coast before hitting three fourth-category climbs.

The Giro finishes on May 29 in Verona.