Levens, France: Maximilian Schachmann retained his Paris-Nice title after overnight race leader Primoz Roglic suffered an ordeal in the final stage, a 92-kilometre ride from Le-plan-du-Var to Levens on Sunday.

Roglic, who had a 52-second lead going into the last stage, crashed twice before being forced to change bike and, without a teammate to pace him back into the bunch, he lost considerable ground to end up outside the final top 10.

The Slovenian’s woes brought back memories of last year’s Tour de France, when he cracked in the final time trial to end up second behind compatriot Tadej Pogacar.

“It was not the stage I was hoping for. I made mistakes today. The first crash [I] dislocated my shoulder and after the second crash I was so far behind that I couldn’t come back,” said Roglic.

“It was a huge fight to the finish in which I gave everything. I am disappointed, but this is also part of our sport.” 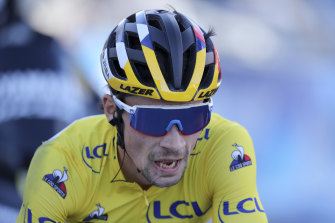 Primoz Roglic gasps at the final stage of Paris-Nice on Sunday. Credit:AP

Roglic won three stages in this year’s Paris-Nice but it did not matter in the end as German Schachmann of the Bora-hansgrohe team finished on top, ahead of Russian Aleksandr Vlasov and Spain’s Ion Izaguirre, who both ride for Astana.

“I don’t know if I can be happy, or I’m also a bit … it’s not nice to win like that, it’s really difficult,” the defending champion Schachmann said.

Dane Magnus Cort Nielsen won the final stage ahead of France’s Christophe Laporte at the end of a short sprint. 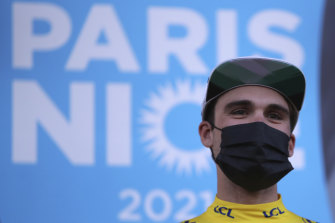 Maximilian Schachmann in the yellow leader’s jersey for the second year in a row. Credit:AP

Meanwhile, in Italy, Mathieu van der Poel emptied his tank to take a solo win in the fifth stage of the Tirreno-Adriatico on Sunday as Tour de France champion Tadej Pogacar extended his overall lead in impressive style.

Dutchman Van der Poel first attacked the main bunch with 60km left on a stormy, cold day in the Marche, accelerating repeatedly until he was on his own before extending his advantage to almost three minutes.

He seemed to have another dominant win in the bag but cracked in the finale and Slovenian Pogacar, who had jumped away from a group of overall contenders, finished only 10 seconds behind.

Van der Poel did not even have the strength to raise his arms to celebrate.

“I was riding completely on empty in the last few kilometres. I was told that Pogacar was coming close but I wasn’t even able to listen,” Van der Poel said.

“I just wanted to reach the finish as fast as I could. I’m happy with the win. I attacked from far away because I was cold and I felt good until 20km to go.”

Belgian Wout van Aert, who is second overall, limited the damage to end the stage in third place, 49 seconds off the pace.

After the 205km ride from Castellalto to Castelfidardo, Pogacar leads van Aert by 1:15 and Spain’s Mikel Landa by 3:00 with 2019 Tour de France winner Egan Bernal in fourth place, 3:30 off the pace.

Monday’s sixth stage is a 169km ride from Castelraimondo to Lido di Fermo.