Australian cyclist Lauren Kitchen noticed changes in her behaviour for months following a crash in which she suffered a broken collarbone and "bad" concussion in her first race back from a COVID-19 competition shutdown last year.

The 30-year-old sustained road rash and swelling to her head and face in the July crash but at the time it came second to the broken collarbone she underwent surgery for.

Kitchen's bones healed, but she later realised something else wasn't "quite right" and it wasn't just her reduced physical form in the top-tier WorldTour after a stretch rehabilitating on the sidelines.

"I raced again, eight or nine weeks after that [crash] and came third in my first race back, it was a small race but that was great. I'm like, 'Oh wow, OK,' but then I raced in the WorldTour and I was like, 'Oh yes, I've missed nine weeks of the 12-week season,'" Kitchen told The Age and the Herald.

"[I] also struggled a lot mentally with emotions, the response from concussion basically. I'd never realised the impacts of that. I've seen it a lot, concussion, and aware of it but how can you tell your own head if it's you? It's really strange.

"When you get a broken arm or a broken leg, you know, you can see it, but when there is something not quite right in your head you don't know. That was challenging to pick up and then recognise and then deal with [it with] the team."

When you get a broken arm or a broken leg, you know, you can see it, but when there is something not quite right in your head you don't know.

"For me, I really struggled with emotions and it went for a few months. But as soon as I recognised it, and I still notice things are a bit different from that, but I went and saw some holistic people as well because doctors, they don't understand, in my opinion, enough yet and I'm more confident in the people that I trust," she said.

Concussion is currently a hot topic across Australian domestic and international sporting codes, from cricketer Will Pucovski’s well-documented struggle to the posthumous diagnosis of Chronic Traumatic Enceohalopathy (CTE), a degenerative brain disease found in people with a history of head knocks, in late AFL icons Graham ‘Polly’ Farmer and Danny Frawley.

A recent Monash University study into the delayed effects of concussion found evidence in a sample of amateur Aussie Rules players that male – but not female – footballers were likely to return to competition with elevated levels of damaged brain cells despite reporting no symptoms. 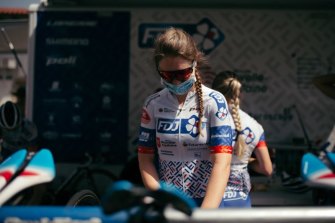 Australian cyclist Lauren Kitchen broke her collarbone in a mid-year crash last season and required surgery but concussion symptoms are what really threw her.

Kitchen was one of significantly fewer WorldTour cyclists who returned to Australia from Europe with the support of her team for the off- and pre-season this summer. Many riders were put off by the mandatory two-week quarantine protocols and the near wholesale cancellation of races here, including the Tour Down Under. However, the team FDJ Nouvelle-Aquitaine Futuroscope road captain believes her trip, despite self-funded quarantine in Perth and navigating trigger-happy state border closures, has aided her recovery from concussion.

"I feel like it's good now and I think coming back to Australia really helped me," she said.

"Accepting that I wasn't 100 per cent was the biggest thing for me and talking about it.

"That was challenging and definitely threw my season, but I did again learn a lot in all of that, so it wasn't terrible, but it wasn't a season to remember with results or anything."

Kitchen is aiming to compete at the national road championships in Buninyong, Victoria next month, state border closures with her native NSW permitting, before returning to the home she has bought in France. The cobbled classics, world championships in Belgium and Tokyo Olympic Games selection are key objectives this year but Kitchen admits she doesn't know what to expect when competition resumes abroad.

The former Oceania road champion was last year uneasy about competing within an international peloton, across Europe amid the pandemic and believes, despite rigorous UCI testing, that there were more positive COVID-19 cases in the sponsorship-dependent sport than publicly announced.

"It's very tough in Europe at the moment, travel, races. My team, the girls, we didn't want to race because we were genuinely concerned we would get the virus and pass it on and how does that affect us?" Kitchen said.

"We all know lots of people that have had the virus and I think there's a lot of women who have had it that haven't been publicly announced within the peloton.

"There's a lot more than what's been said, and I think there's a genuine concern, but the teams at some point are like 'you have to race' because they need to promote the sponsors, so it's really hard. That created a lot of anxiety, and the amount of tests you have to have and organising that yourself to an extent is challenging, different countries and all that.

"What we saw last year was every race was so important for everyone. Everyone was sort of desperate and I think that's also why there was probably a lot of crashes in general in the men's and women's [peloton]. There's more pressure and anxiety around everything so people take more risks but also are more nervous and stressed. I wouldn't be surprised if that continues a little bit."

Dennis on song for time trial titles after team split

I’m lucky to be alive, says Froome after horror crash