It’s been a tough couple of years for Wollongong. First came the bushfires which ravaged the South Coast region, destroying homes, livelihoods and ecosystems. Next was the pandemic and all the physical, mental and financial anguish that came with it.

But the good times are – hopefully – just around the corner, as the UCI Road World Championships prepare to show the city’s best face to a global audience of 300 million people next September, kickstarting not only the city’s tourism revival but also Australia’s ‘green and gold decade’ of major sporting events, culminating with the Brisbane Olympics in 2032. 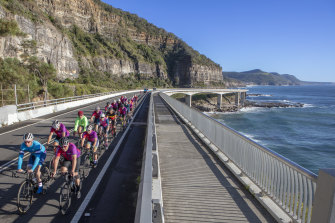 The courses for the UCI titles were unveiled on Friday, and they are truly spectacular. More than 1000 of the world’s best cyclists will battle it out in picturesque surrounds, tackling challenging climbs that will take them through sub-tropical rainforests, along rugged coastal cliffs overlooking some of Australia’s top beaches, and past some of the more iconic landmarks of the Wollongong CBD.

For spectators, there will be eight lookout points along the escarpment encircling Wollongong that will offer breathtaking views over the Pacific Ocean.

The road race and time trial will both finish on Marine Drive in the city centre, next to the white sands of City Beach with the iconic Flagstaff Hill behind in the distance – an image that Stuart Taggart, the event’s CEO, can’t wait to show off to the rest of the world.

“When you get to moments like this in your planning, that’s the time to pause and say, ‘wow’,” Taggart told the Herald and The Age. 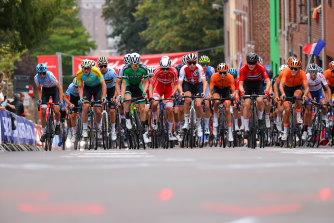 Eleven world title races will be held in and around Wollongong in September.Credit:Alex Whitehead/SWpix.com

“We’re trying to create something special, a once-in-a-generation opportunity for the city. We’re really excited about what that can bring for the fans that come to town and the athletes themselves to have a really unique finish with a spectator group that’ll be very excited to watch it.

“It’s a beautiful city, and really unique that it’s quite a narrow city, it’s got a really beautiful coastline with many beaches that we’ll be showcasing.

“We’ve got a topography of an escarpment that is very close, so the ocean and the escarpment are much closer than they are in many other parts of the world. With a sport like road cycling, the way it’s broadcast, there’s a lot of imagery coming from the air, so that’s going to be a great opportunity to showcase this part of the world from a global tourism perspective.”

The UCI Road World Championships – part of the ‘Triple Crown’ of road cycling, along with the Giro d’Italia and the Tour de France – have only been held in Australia once before, when Geelong and Melbourne played host in 2010.

For Wollongong, which is now the only UCI Bike City in the southern hemisphere, an event of this scale is unprecedented. There will be 11 world championship races held across the eight days of the event, between 18-25 September, and for the first time, the elite men’s and women’s time trials will take place on the same day and across the same distance.

It will finish with the road races, which will unfold over three main components – a remote start in Helensburgh, next to Royal National Park, then a loop through Mount Keira featuring a gruelling 473m climb, before a circuit through the city and its surrounding suburbs.

Organisers are confident of attracting close to 12,000 international visitors among a total of 300,000 spectators, and project the event will create an overall economic impact of $95 million to the region. They are, however, at the mercy of COVID-19, which gives them and all other major event planners little choice but to make contingency plans for the worst, and hope for the best.

“There’s a lot of moving parts when you’re planning an international major event but that’s the challenge that we take on, and all of us in the industry love,” Taggart said.

“This is a real opportunity for the city, the event and for the sport, to have the eyes of the world on Wollongong in that way is a transformational moment for the city. We just want people to experience the sport in their backyard and take that opportunity. It’s not one that comes around too often.”

Every minute of every racing from the 2022 UCI Road World Championships in Wollongong will be shown ad-free, live and on demand on Stan Sport with select live coverage on the Nine Network