Australian cyclists Matthew Glaetzer and Thomas Cornish finished one-two in the men’s 1000m time trial despite being forced to change to less aerodynamic sprint handlebars after AusCycling found the previous bars were not suitable for the stresses of the event.

Both cyclists completed stunning times to finish ahead of top-ranked cyclist Nicholas Paul from Trinidad and Tobago, who finished third. 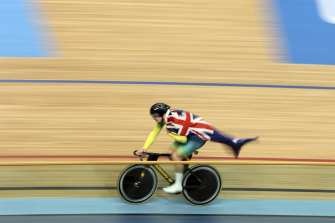 Glaetzer defended his Commonwealth Games title from four years ago, finishing in 59.505 to beat Cornish’s 1.00.036.

“It felt terrible with two laps to go, but I knew I had one last ride and I’ve been there before, come back from disappointment,” Glaetzer told Channel Seven.

“It just goes to show that, no matter what happens, you can always go again.

“My goal was to go to some 59 seconds here but when we lost the bars, it’s like well, I’ll just have to go sub one minute on sprint bars and that turned out to get the job done.

“The sport and AusCycling were rocked by the serious facial injuries suffered by Alex Porter following a crash at the Tokyo Olympics last year, which resulted in a scathing review that found AusCycling had failed to properly stress-test equipment used by its athletes.

AusCycling high-performance director Jesse Korf told Channel Seven early on Tuesday morning that because the 1000m time trial was not an Olympic event, they hadn’t yet found replacement handlebars that met their stress testing numbers standards. They plan to have a solution before the next world championships.

The equipment change was expected to cost each cyclist a second to a 1½ seconds.

“After Tokyo, we obviously had the unfortunate incident about the handlebar situation we’ve had an inquiry around it and have gotten into a much more robust, more thought-out approach to our equipment,” Korf told Channel Seven.

“That took a while before we had all that information to work through it with all of our manufacturers and suppliers. 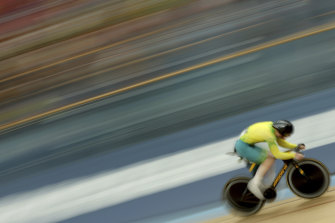 “We’ve been in very close contact with our suppliers and are still doing so. Unfortunately, we have found out that equipment that was supposed to be used for this specific event did not meet up to our new standards. We obviously want to put athlete health first.

“First and foremost, we’re working on solutions with industry and we’ll have appropriate solutions for the world championships.”