Jason Day has credited a realisation not to "get angry" with Riviera Country Club for his lowest round at the Los Angeles course.

The former world No.1 had never broken 70 in 12 previous rounds at Riviera, but posted a three-under-par 68 on day one of Tiger Woods' Genesis Invitational. 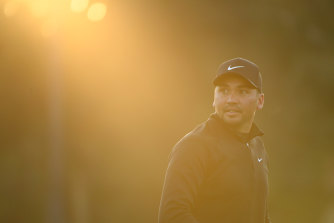 Jason Day had a strong first round at Tiger Woods’ PGA event.Credit:Getty Images

Day, a 12-time US PGA Tour winner, had never recorded a result better than a tie for 62nd in four starts at Riviera and had missed the cut twice.

But the 32-year-old said he lowered his expectations to set himself up for the rest of the week.

"I realised I can't come here and get angry, because it just won't help," Day said. 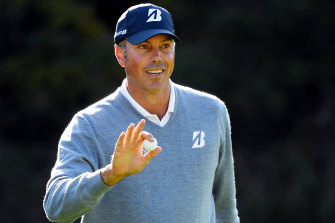 Matt Kuchar had a much more enjoyable first round at the tournament this year, after being heckled by fans last year.Credit:Getty Images

"I knew I had to come into a week like this with a different mindset. I changed the way I view this course, because I actually really like it.

"I haven't had greatest finishes here, so I brought down my expectations to take the weight off my shoulders.

"It meant I could just go out there and play freely today."

Day said that was particularly difficult given the tournament had been rebranded this year as Tiger Woods' own US Tour event with invitational status and limited field of 120 golfers.

"Yes, it's a big week and there are a lot of good players here, so your expectations can go up pretty dramatically," he said.

Day's scrambling was remarkable on Thursday, made more difficult by the fact he hit just five of 14 fairways and 12 of 18 greens in regulation.

But he saved par five times from six attempts to keep himself well in contention.

"Overall, it was a solid day. If I missed the fairway I put myself in position to save par," Day said.

"I'm very pleased with the start and I'm putting better than I have in a while. Hopefully I can keep that up in the next three rounds."

Kuchar's first-round lead comes a year after being taunted by drunken fans for underpaying a Mexican caddie.

On the first day of the 2019 event, Kuchar was heckled relentlessly for paying a local resort caddie just $US5000 of his $US1.3 million winner’s share at the Mayakoba Classic in Cancun in November 2018.

In the opening round at Riviera last year, members of the crowd were heard heckling Kuch with, ‘‘Go low Kuch, go low! Just not on the gratuity!’’ and ‘‘10 per cent’’. After that round, Kuchar issued an apology and agreed to pay Ortiz $US50,000.

On Thursday, however, Kuchar enjoyed a more pleasant day at Riviera when he carded seven birdies and no bogeys to top the Genesis Invitational leaderboard at seven-under par.

‘‘It’s a place that I absolutely love coming every year.

‘‘I think it’s one of the few courses that has truly stood the test of time.’’

Tiger struggles to 75 in tame conditions; ‘just off’