Jason Day and Marc Leishman extended their lead in the Greg Norman-hosted QBE Shootout event on Sunday, courtesy of Leishman holing out for an eagle for the second straight day.

The Australian team will head into the third and final round of the PGA Tour ‘silly season’ event in Florida – which boasts a $A1.25 million prize cheque for the winning pair – with a three-stroke lead. 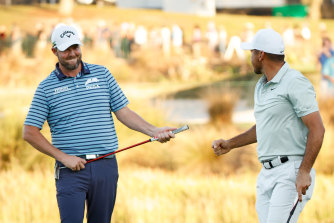 Marc Leishman and Jason Day celebrate their birdie on the 18th green.Credit:Getty

Leishman provided the highlight of the day at Tiburón Golf Club in Naples when he sank a long-range eagle for the second straight round, and along with six birdies, the pair pushed out to a score of 24-under.

First played in 1989 and previously known as the “Shark Shootout”, the Norman-hosted QBE Shootout is the longest-running event in the PGA Tour’s post-season calendar.

There are 24 players in the field and they are paired up to form 12 teams. The golfers play scramble on the first day and a modified alternate shot on day two, before a four-ball format for the final round. 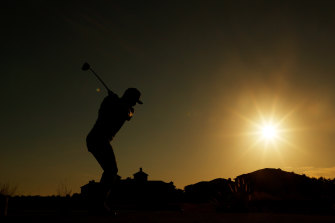 Jason Day plays his shot at the QBE Shootout.Credit:Getty

Also in the field are defending champions Harris English and Matt Kuchar.

Speaking after the first round, Day credited some Presidents Cup experiences as the reason why he and Leishman have strong golfing chemistry.

“As teammates over multiple Presidents Cups we’ve got that comfort level and being from Australia we’ve been good mates for a long time,” said Day.

“I played amateur and junior golf with Leish so I’ve known him for a very long time and just the dynamic of how he hits the ball, I know he’s going to keep it out in front of him and I can try and get the ball down there as far as we can.

“Leish played some tremendous golf today. We talked about the two hole-outs but his putting is really crucial for us.”

Leishman and Day tee off in the final round at 3am (AEDT).