DEREK LAWRENSON: Returning hero Padraig Harrington’s Irish party after clinching the US Senior Open will shame the LIV rebels competing against a backdrop of civic unrest

A couple of hours from Dublin, they will be toasting the returning hero at the Horizon Irish Open this week as Padraig Harrington arrives home a major winner once more, after following up Matt Fitzpatrick’s US Open victory by claiming the senior version on Sunday.

Contrast that with the bitter mood at Pumpkin Ridge, on the outskirts of Portland, Oregon, where the second LIV event begins on Thursday against a backdrop of civic unrest as the anger against the Saudi-backed circuit and the untold harm it is doing to the game grows.

Harrington claimed his first senior title by one shot from Steve Stricker, his opposite number as captain at the Ryder Cup at Whistling Straits last September. We all know how that one went. 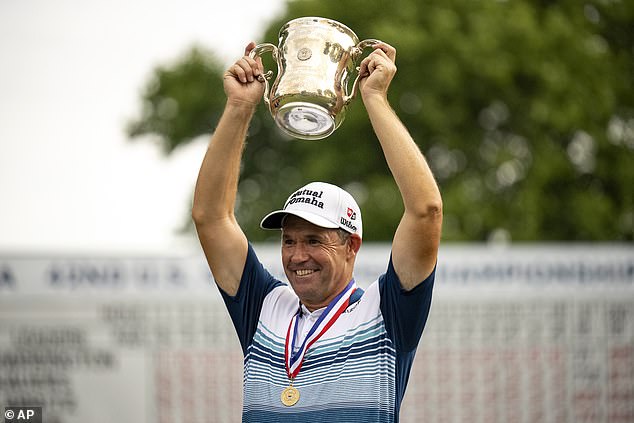 It was a different story with clubs in their hands, as Harrington appeared hell bent on handing out a comparable thrashing, with a six-stroke lead at one point. A combination of Irish nerves and some late American birdies left Harrington hanging on to follow up his three major victories at the Open (2007-08) and US PGA (2008).

The field at the second LIV event is undeniably much stronger than the first at St Albans, with additions including Brooks Koepka, Bryson DeChambeau, Patrick Reed, and Abraham Ancer. It does not mean the welcome is any more effusive.

A letter from the local mayor and signed by fellow dignitaries of surrounding towns was sent to the organisers, expressing their ‘concerns’. It began: ‘We oppose this event because it is being sponsored by a repressive government whose human rights abuses are documented.’

Pumpkin Ridge is one of the most prestigious clubs in the area but, according to the local paper, around 20 members have resigned in protest at the staging, despite having to forsake their £10,000 deposit entrance fee. The head pro has also resigned. The organisers, playing to their bosses back in Jeddah, will prohibit spectators from displaying any protest signs.

As for Greg Norman, the face of LIV, he has lost another fan in Karrie Webb, who grew up idolising him. When asked about the rumour the Saudis might turn to the female game next (I know, the irony), the greatest Aussie woman golfer of all time responded bluntly to Golfweek: ‘I know Greg has had a vendetta against the PGA Tour for as long as I’ve known him, so I don’t think there’s any changing him. I would just ask that in his ambition to succeed, he doesn’t ruin women’s golf in the process.’ 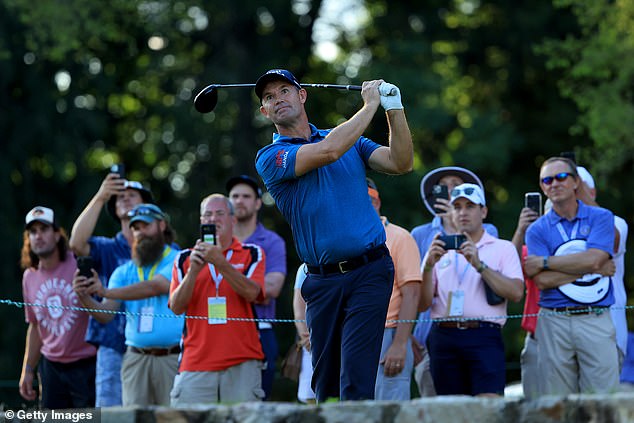 Is there a way of preventing this ruination, given the limitless wealth of a sovereign nation prepared to bankroll Norman’s revenge, predicated on his ambitions for a global tour being snubbed more than a quarter of a century ago? There is, perhaps, one organisation who might be able to shift the momentum in this desperate civil war.

LIV are waiting to hear whether their highly lucrative exhibition events will be awarded world ranking points. If their application is unsuccessful, meaning LIV rebels will struggle to get into the four majors in ensuing years, that might prove a game-changer.

In the meantime, this divisive and volatile period continues. On the one hand, the unbridled joy that will greet Harrington, Shane Lowry and the rest playing for £4.8million at Mount Juliet. On the other, the acrimony and revulsion facing Lee Westwood, Ian Poulter and their fellow Saudi stooges competing for £20m in Portland.

SPARE A THOUGHT FOR LEXI, MISSED PUTTS SCARRED HER

It is hard to imagine there was a golfer anywhere who did not feel sympathy for Lexi Thompson and what looked an attack of the putting yips over the closing holes at the women’s PGA Championship in Washington on Sunday.

A first major in eight years was there for the American until she stepped up to a two-foot putt at the 14th — and it never even touched the hole.

Is there a similar failure of nerve in another sport quite so cruel as this one? Imagine all those hours of practice to get so good at the game and then, when it really matters, you cannot hole from two feet? The scarring from past near misses in majors showed itself in brutal fashion and will leave a still deeper mark following this devastating loss to Korean Chun In-gee.

On Twitter, there were heartless members of the media giving her grief for not speaking about it. If ever five seconds of video equalled a thousand words, it was this instance.

At 27, you would like to think there is a way back from this for poor Lexi. Suffice to say, if she does go on to win another major, it will be an act of pure sporting heroism.

Can someone please check on Greg Norman