DEREK LAWRENSON: It’s not hard to see why Danny Willett is frustrated at Government snub to allow fans back for the British Masters… while Rory McIlroy’s emotional Wells Fargo win proves his motivation – and now he could go on an unbeatable streak

The pride felt by Danny Willett at being the host for the Betfred British Masters beginning at the Belfry on Wednesday is tempered by frustration at the fact it will be another fan-free zone.

In the week when more than 20,000 spectators will attend the FA Cup final at Wembley, it’s not hard to see why golf feels seriously aggrieved at being excluded from the Government’s pilot scheme.

You allow people indoors at the Crucible for the snooker, but don’t permit the European Tour to mark their return to the UK with 2,000 spectators roaming over hundreds of acres in Sutton Coldfield? 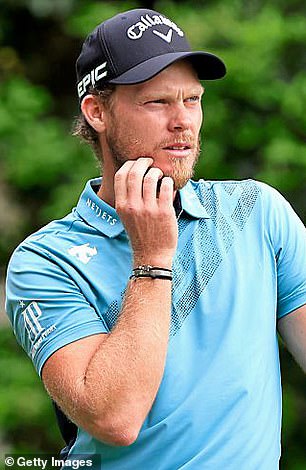 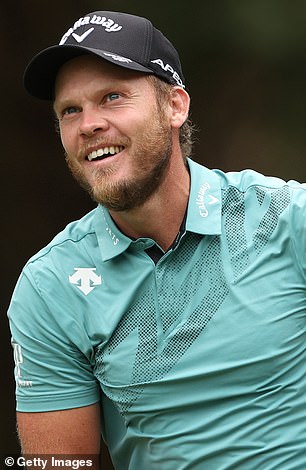 ‘It is a great shame,’ says the 2016 Masters champion, choosing his words carefully. ‘We were convinced we would be one of the pilot events, the first golf tournament to have a decent number of fans since the first Covid lockdown.

‘We were only asking for a relatively small number as well, certainly in comparison to the FA Cup final. How could you get a safer environment, where the fans would be getting plenty of exercise as well? It looked such a good fit.’

The decision proved a double whammy for Willett, with the field seriously weakened by the absence of the strong English contingent based in America.

‘You can hardly blame the guys for not coming back when it would have meant going straight into the bubble and seeing no family,’ says the 33-year-old Yorkshireman. ‘If we’d have been allowed a bit of leeway, with their friends and relatives able to watch, I think a few would have come back over to play.’

Willett would have looked into staging the tournament at a course closer to his home in Rotherham if it had been known that the wide-open spaces at the Belfry would not be utilised. ‘We could have considered smaller venues that don’t get to host big events but, having said that, the Belfry has it all and it’s a pleasure to go to such an iconic venue,’ he says.

‘I remember going there for the first time for the 2002 Ryder Cup to watch the practice rounds and sitting behind the 10th tee watching the guys. I couldn’t get over how many people attended a Ryder Cup. It was insanely busy.’ 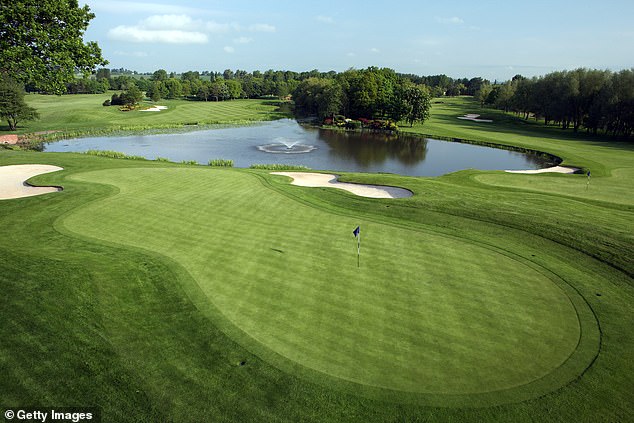 It should have been moderately busy this week with Willett getting the occasion he deserved, as one of only two Englishmen to win a major in the last 25 years.

Instead it will be another ghost-town event, albeit one that marks a ramping-up of the Ryder Cup qualification process, with double points on offer.

Willett still has hopes of making that team in September. ‘I’m playing a lot better than my scores indicate but no stellar weeks so far,’ he says.

‘It’s just been one of those years where I’ve missed halfway cuts by one, got on the wrong side of draws weather-wise, and I had Covid and missed a few big events. I’m happy with my game, though. I wouldn’t be surprised if I go on a nice little run this summer.’

It would be some consolation if that nice little run began this week. 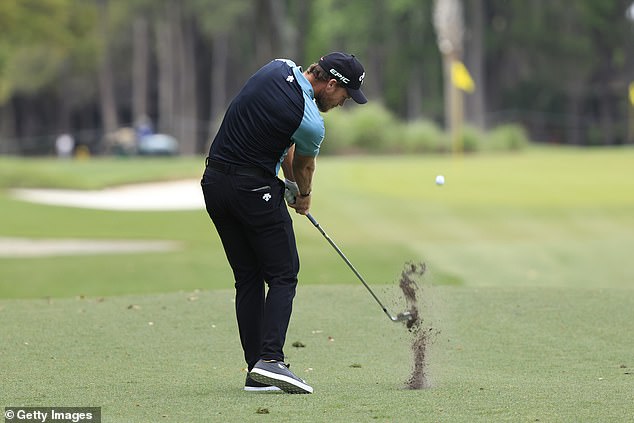 Rory could now be on path to more glory

Rory McIlroy claimed his 29th victory as a professional on Sunday and it’s hard to remember another where he was quite so emotional.

If you want to know the mental toll exacted from falling from first to 15th in the world in less than a year, and a victory drought stretching back 18 months, it was all on view on the 18th green at the Wells Fargo Championship as he struggled to keep the tears from his eyes and blew out his cheeks in relief.

Just remember that scene the next time Rory has a slump and you’re wondering whether it’s because he has too much money. Recall the joy on his face as he savoured the ‘Rory, Rory’ chant from the large crowd.

You can make justifiable criticisms about mental fragility on occasion or technical glitches, but never doubt his motives for playing the game. When he said last Wednesday that he wanted to cement his place in the game’s history, he meant it with every fibre. 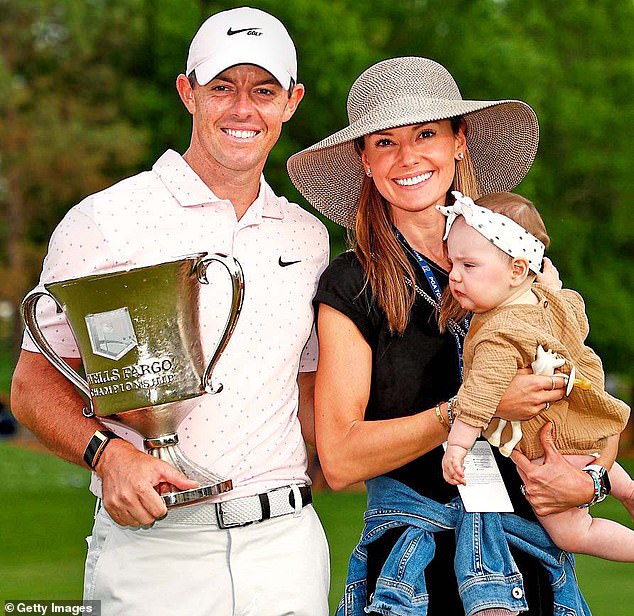 Another thing we’ve learned from the mercurial Northern Irishman’s career is that when he’s got that bounce back in his stride he’s pretty much unbeatable. In 2014 he ended a similar drought at the BMW PGA Championship at Wentworth and followed it two months later by winning three tournaments in a row, including two majors. Now he moves on to the US PGA Championship at Kiawah Island next week.

It’s seven years since McIlroy won the last of his four majors and a return to the place where he won the PGA by a record eight shots in 2012 feels like a gift from the gods.

To think, at the Masters last month we were wondering if he was a busted flush. Get back on the major standard next week and, at the age of 32, all things seem possible again.

‘It’s obviously great timing to win again before heading back to a place where I played so well nine years ago,’ he acknowledged. 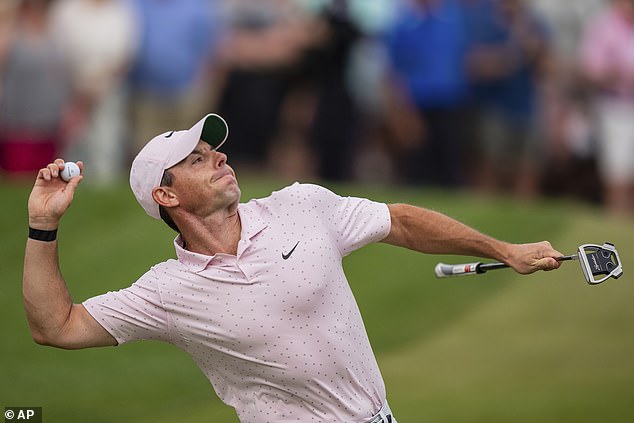 ‘I know from the past that when I see the spark, things can move pretty quickly in the right direction.’

Two men gave him that spark. Two months working with Yorkshireman Pete Cowen was all it took to restore the distance control with his irons. A couple of weeks with renowned sports psychologist Bob Rotella has restored a layer of mental armour to go with the physical.

When Rory’s winning, golf suddenly seems like a much better game. What a scene on the 18th hole at Quail Hollow on Sunday, when thousands of Americans basically ignored their own and cheered for McIlroy instead. Now let’s see if he’s got majors left in him.

The 48th Walker Cup, which ended in a narrow 14-12 victory for the Americans, was one of the best yet, summed up by a touch of class from Alex Fitzpatrick — brother of Matt — and his foursomes partner Barclay Brown.

On the 18th green on Sunday morning, their American opponents had an 18-inch putt to win their match.

‘You’ve got to make them hole it when the point is at stake,’ shrieked 2008 US Ryder Cup captain Paul Azinger on American television.

No you don’t. The two Brits told their opponents to pick up their ball marker and shook hands. A moment to sum up why the Walker Cup is truly one of the great events in golf. 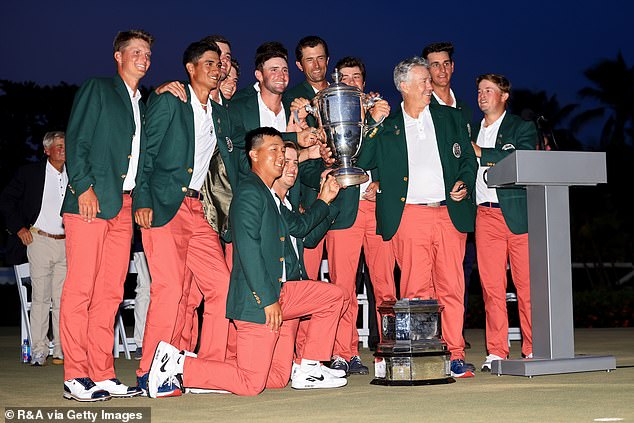