Greg Norman has been accused by American lawmakers of “pimping a billion dollars of Saudi Arabian money” and spreading “propaganda”.

Norman, the chief executive of LIV Golf, spoke with high-ranking politicians on his visit to Washington, DC, on Wednesday, and in some quarters his input was welcomed as the debate over the PGA Tour and anti-competition rules intensifies.

But some Congress representatives who consented to address the media following Norman’s 20-minute presentation to the Republican Study Committee were not at all complimentary about his lobbying for the Saudi-funded circuit.

“Don’t come in here and act like you’re doing some great thing, while you’re pimping a billion dollars of Saudi Arabian money,” Chip Roy, a representative of Texas, said.

“I respect Greg and his [right] to go out and do whatever he wants to do. But it’s not as simple as he tries to make it out to be… this isn’t about pure competition. 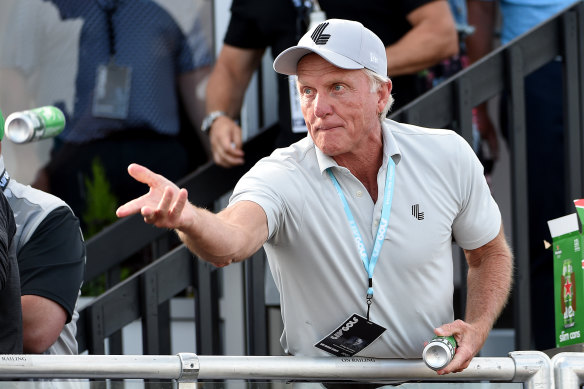 Greg Norman has come in for some harsh criticism on Capitol Hill.Credit:Getty

“He’s always wanted to have a rival operation to take on the Tour, and he’s been unable to do it until he got a billion-dollar sugar daddy known as the kingdom of Saudi Arabia.”

Another representative, Tim Burchett, walked out of Norman’s talk, in which the former world No.1 attempted to give “both sides of the story for them to understand what LIV is all about”. Burchett said: “It’s propaganda. I don’t want to hear about that. It’s not Congress’s business to settle a fight between a bunch of billionaires over a game of golf.”

Burchett also referenced Saudi connections to the September 11 attacks and the kingdom’s role in the murder of journalist Jamal Khashoggi, a US citizen, in a post on Twitter.

Norman might have been surprised to encounter such opposition from the right-wing think tank, particularly as it has close ties with Donald Trump. Burchett put his name to a lawsuit filed at the Supreme Court trying to overturn the results of the 2020 election.

Trump has a stake in LIV, as two of his courses host events this year, including the grand climax in Miami next month. Roy mentioned Trump’s involvement in his claim that Norman ducked the “sportswashing” concerns.

“It was pitched as something to come in there and kind of explain that and talk about it – but I felt it was very clear they didn’t want to.”

The Department of Justice has opened an investigation into whether the PGA Tour is illegally trying to block competition, while LIV Golf and several of its players have filed motions against the Tour for suspending members.

Matt Gaetz, one of Trump’s principal allies in Congress, praised Norman for his pledge, saying he “has a wealth of knowledge regarding the role of golf in culture and in the world”.