The US team fought back in the fourballs on Saturday to level the scores at 8-8 heading into the final day of the Solheim Cup at Gleneagles.

Three of the four fourball matches were decided on the final hole while Americans Danielle Kang and Lizette Salas beat Carlota Ciganda and Azahara Munoz with a birdie on the 17th to go two up. 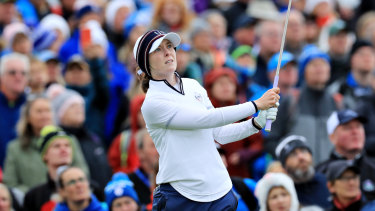 Brittany Altomare of Team USA plays a shot from the 10th tee during day two of the Solheim Cup at Gleneagles.Credit:Getty Images

Gusty conditions with winds clocked at over 50 kph made it difficult for both teams to get going and players also received warnings for slow play.

"It was a tough day, a battle for everyone," Europe's captain Catriona Matthew said.

"But the first two days has shown how close both teams are. Sunday will come down to the odd shot that will get momentum going one way or the other."

The match between Europe's Jodi Ewart Shadoff and Caroline Masson and Americans Lexi Thompson Marina Alex finished all square after both teams won three holes each to halve the points.

Americans Brittany Altomare and Annie Park and Europe's Georgia Hall and Celine Boutier won their respective matches to ensure both teams were level heading into Sunday's singles matches where 12 points are up for grabs.

"It was just back and forth the whole day," Park said. "Both teams played some great golf in these conditions.

"It was tough out there. I'm so glad I played the Scottish Open. It was like this, maybe even worse. But I'm glad that I got that practice out."

Earlier, Europe held a slender one-point advantage over the US with a 6-1/2 to 5-1/2 lead after the foursomes saw the teams share two wins each.

The American Korda sisters, Jessica and Nelly, picked up where they left off on Friday at the PGA Centenary Course with a dominant 6 & 5 victory over Ciganda and Bronte Law.

Struggling Bronte and Law failed to sink a single birdie as the Americans claimed a point to level the overall score.

Europe, who were leading 4-1/2 to 3-1/2 after Friday's fourballs, then had Charley Hull and Azahara Munoz to thank for their 4 & 3 victory over Danielle Kang and Megan Khang.

They were also boosted by Georgia Hall and Celine Boutier whose 3 & 2 victory over Lizette Salas and Ally McDonald at the 16th hole gave them two points.

But Americans Morgan Pressel and Marina Alex, who trailed Anna Nordqvist and Anne Van Dam by four after six holes, stunned the Europeans by taking seven of the next nine for a 2 & 1 victory.

Defending champions U.S. need 14 points to retain the Solheim Cup while Europe must score 14-1/2 to win the title for the first time since 2013.

The 7 things Tiger Woods, Rory McIlroy and Patrick Reed are BANNED from doing at Augusta