Jamal Khashoggi was a loudmouth journalist, notable for speaking and writing his mind on a variety of subjects, including the horrors of actions taken by Mohammed bin Salman Al Saud, the Saudi Arabian crown prince, deputy prime minister, minister of defence and chair of SA’s Public Investment Fund.

When visiting the Saudi Arabian Consulate in Istanbul on October 2, 2018, Khashoggi was fallen upon by a team of 15 assassins sent all the way from Saudi Arabia on two of the Public Investment Fund’s private jets.

According to later Turkish intelligence, the bound Khashoggi then had a phone conversation with Saud al-Qahtani, Mohammed bin Salman’s top aide, who insulted the journalist. Khashoggi, with staggering courage, responded in kind before Qahtani gave the orders to his assassins: “Bring me the head of the dog.”

First Khashoggi was tortured, with parts of his body cut off with a bone-saw – with the team of assassins wearing head-phones to prevent hearing the unpleasantness of his screams. It took about seven minutes before the journalist and critic of Mohammed bin Salman Al Saud breathed his merciful last. His body parts were then burnt in the consulate garden.

This year, that same Public Investment Fund chaired by Mohammed bin Salman Al Saud launched an alternative global golf tournament, with the specific goal of changing Saudi Arabia’s image, to making the world feel better about their torturous regime. Their frontman was our own Greg Norman who, this week, was asked how the hell he could front for a regime like the Saudis, work for a murderous tyrant like Mohammed bin Salman Al Saud – responsible for such atrocities, less than four years ago!

“Everybody has owned up to it, right?” Norman blithely replied. Greg! You get this is more than just hiding the teacher’s ruler, yes? 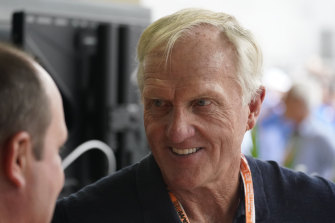 We have indeed all made mistakes. Who among us can say one time in our lives, just ONCE, we haven’t organised the murder and dismemberment of someone whose opinions we didn’t like? In this case, Greg, you seem to be hoping that your boss and mentor Mohammed bin Salman Al Saud, might have learned murdering and dismemberment is not quite the go, yes? And he will try and correct his actions in future and remember, remember, remember, sweet September, not to order bone-saw chopping up of uppity journalists.

“This whole thing about Saudi Arabia and Khashoggi and human rights, talk about it, (mighty big of you, Tex,) but also talk about the good the country is doing to change its culture”.

Has Mohammed bin Salman Al Saud been put on public trial? Do you think that might be a good start to changing Saudi Arabia’s culture?

“There are a lot of countries in this world that have a cross to bear too.”

Lately, Greg Norman, you are ours. We don’t mind so much you are embarrassing yourself in front of the world. You’ve been doing that for at least two decades. We mind you embarrassing us Australians. Your support of that murderer, and his execrable regime is an appalling disgrace. And so are you.