As a debt of gratitude, Cameron Smith paid off his father Des’ mortgage last Christmas. It meant a lot to Des, who is known to walk the Augusta National fairways with beer in hand watching his son at one of golf’s greatest cathedrals.

Twenty-five years ago, Des missed a day of work to mourn Greg Norman’s final day Masters meltdown. Like most Australians, he didn’t know if the country’s green jacket curse would ever be broken after that harrowing Sunday afternoon. 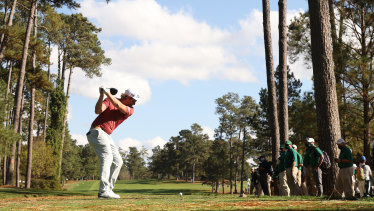 Cameron Smith became the first player in Masters history to shoot four rounds in the 60s.Credit:Getty

This year, his son returns to Augusta with a medal named in Norman’s honour as Australia’s best golfer of 2020 and a desire to create another Masters memory after being the first in the tournament’s 84-year history to shoot four rounds in the 60s last year.

“I wouldn’t say I lose sleep over it, but every time someone brings it up I go, ‘yeah, that’s pretty cool’,” Smith told The Sydney Morning Herald and The Age. “I’ve told anyone that has said something though, ‘I’d take a 70 and a green jacket’.

“I wouldn’t say life has changed too much [after setting the record], but it would have changed a heck of a lot more if I won. I think there’s a lot of things externally away from golf that could have happened.

“The weeks after it everyone is asking for interviews and you’re doing a whole bunch of things you wouldn’t usually do. That changed for me. But it has settled back down now.”

“I wouldn’t say life has changed too much [after setting the record], but it would have changed a heck of a lot more if I won.”

The world No.1 ended up beating Smith and his Presidents Cup teammate Sungjae Im by five shots, but it was hard to wipe the smile off Smith’s face. For those that know him, it was a performance they knew Smith was capable of. Augusta is unforgiving for those with a questionable approach and short game, and that’s Smith’s strong suit.

There was a sense of calm about Smith all week, as he scrambled his way to a record not even Woods, Nicklaus or Player could achieve. Yet it still wasn’t enough to win as Johnson broke plenty of scoring records himself.

“We were doing our own thing and the game felt good leading up to that week as well, which is a massive positive when you’re going to somewhere you love and you know you can play well at,” Smith said. “It was just very calm. 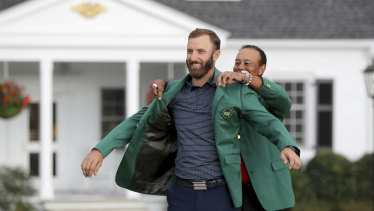 Dustin Johnson is presented the green jacket by Tiger Woods.Credit:AP

“But it’s going to be nice having some people out there making some noise this week. That place is so cool when there’s people there, the roars that go through the whole course [are amazing]. It will be good to have that atmosphere back, which was definitely lacking last year.”

Smith will join 2013 Masters hero Adam Scott, Jason Day, Marc Leishman and Matt Jones in the Masters field. For the first time, he’s the bookmakers’ pick to be the top Australian at a course where he’s never missed the cut in four attempts and has two top-five finishes.

For someone who prefers to sidestep the limelight, he will be firmly in it this week after being paired with the rejuvenated Jordan Spieth and major winner Collin Morikawa for the first two rounds.

Smith, 27, hasn’t seen his coach Grant Field in person since the COVID-19 pandemic began, resorting to weekly FaceTime catch-ups to iron out any deficiencies in his game.

He’s the first to admit the chances of anyone matching his record this week are remote, the drier conditions in the Masters’ traditional April timeslot set to make scoring tough again.

Maybe the only difference since Smith’s last trip to Augusta is that he’s fishing a lot more now than last year. And there’s also the wild mullet he’s refused to cut since growing it during lockdown, which he doesn’t dare touch now.

“A lot of the rugby league guys had it and then after a while I thought, ‘stuff it, I’m just going to keep it’,” Smith said.

“My girlfriend [Jordan Ontiveros] hates it. My mum is coming around and my nan thinks it’s the best thing ever. I’m afraid I’m going to wake up one night and [Jordan’s] going to be chopping it off.”

As for dad, he doesn’t care what hairstyle his son’s rocking as he’s a chance of righting Norman’s wrongs from all those years ago. And he won’t need to turn up for work if he does.

AUSTRALIANS AT THE MASTERS