Portrush: Irishman Shane Lowry has won the British Open in a procession, sending fans into a frenzy with an emotion-charged six-stroke victory at Royal Portrush. 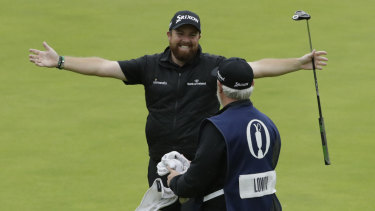 Ireland’s Shane Lowry celebrates on the 18th green with his caddie Bo Martin after winning the British Open at Royal Portrush in Northern Ireland on Sunday.Credit:AP

Lowry closed with a one-over-par 72 in gruelling conditions on Sunday to finish at 15 under for the championship and comfortably clear of English runner-up Tommy Fleetwood.

In the first Open held in Northern Ireland since 1951, Lowry joins Padraig Harrington as only the second man from south of the border to claim the Claret Jug, or win any of golf's four majors.

In converting his overnight four-shot lead into a day-long celebration for jubilant home fans, Lowry also buried the demons of his bitter 2016 US Open defeat when he squandered a same-sized third-round buffer at Oakmont to hand Dustin Johnson the trophy.

His lead on Sunday was briefly cut to three when he bogeyed the first hole after finding the rough off the tee then sand with his approach.

But that was as close as Fleetwood, or anyone else from the chasing pack, would get to reeling Lowry in.

Deafening roars from the delirious crowd resonated around the course as birdies at the fourth, where he drove the green, fifth and seventh holes had Lowry briefly at 18 under. 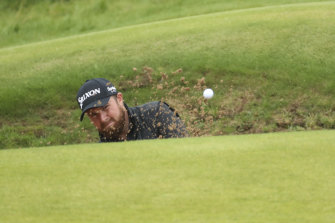 Shane Lowry plays out of a bunker on the 13th green during the final round of the Open at Royal Portrush in Northern Ireland on Sunday.Credit:AP

The all-time major championship 72-hole record of 20 under – shared by Australian Jason Day from the 2015 US PGA Championship at Whistling Straits and Swede Henrik Stenson at the Open three years ago at Royal Troon – at one point looked on the cards.

Successive bogeys at eight and nine put an end to that, but Fleetwood was unable to take advantage of the smallest of look-ins, dropping a shot himself on 10 as Lowry made a clutch par to retain a six-shot buffer.

Fleetwood, who finished with a 74, trimmed the deficit to four shots with a birdie on 12.

But he was always going to have to settle for second prize, with American Tony Finau third a further stroke behind at seven under after a final-round 71.