Bryson’s Madcap Masters! Armed with his unique new 4.5 degree loft driver, DeChambeau has plotted an incredible route around Augusta… including looking to carry his tee shot on the first hole 360 yards

Anyone who thought Bryson DeChambeau might dial down the hype this week after his Masters flop last November simply doesn’t know the mad scientist. He can’t help himself, bless him.

The first tee was always going to be the place to be at 1.36pm on Thursday when he begins his latest quest to bring Augusta to its knees and claim the Green Jacket.

But, just in case there was anyone among the limited audience who was thinking of a late lunch or settling down somewhere else, Bryson has surely convinced them otherwise after disclosing his intention to unleash a tee shot the like of which the hole has never seen before. 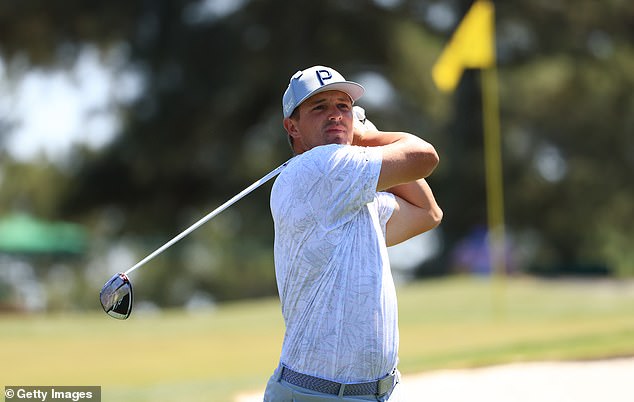 Armed with a new driver with a rumoured loft of just 4.5 degrees — no other top golfer has probably even contemplated using one with a loft of less than 7.5 degrees — he will literally be taking the Masters in a new direction.

While most of the field will be aiming left of the fairway bunker, and a few of the big hitters will attempt to clear it, DeChambeau is intending to take aim over the trees to the right of the bunker, in the hope of finding a wider stretch of finely cut grass just short of the putting surface on this 445 yard par four. The only bunker he’s worrying about, therefore, is the greenside one.

Of course, he might bail out if the wind is in the wrong direction and take a mere mortal’s line.

‘That’s not the intention, though,’ he stressed. ‘The intended line is down the right, as far as I can go.’

How can you hit the ball so high as to clear the tall pines with a driver loft so low? Naturally, the physics graduate has worked out the science, with his ultra-long tees and hitting the ball on the up. 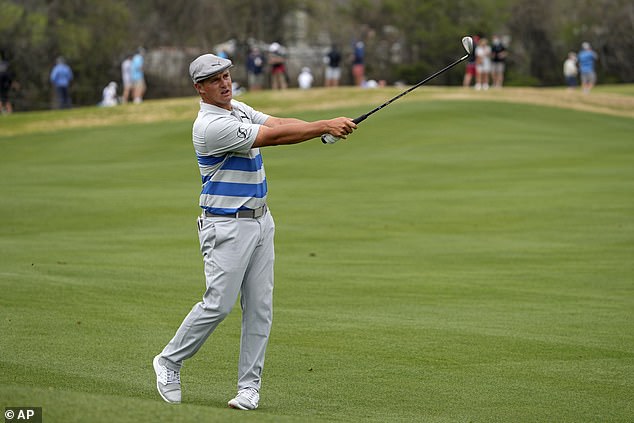 The burly Californian is aiming to take Augusta, and golf in general, in a different direction

It’s one thing saying it and envisaging it, of course. Quite another to step up and pull it off. In practice, DeChambeau matched deed with word, executing the estimated 360-yard carry not once, but twice.

There was more. On virtually every par four he described lines off tees that drew uncomprehending, bewildered expressions in the press room. If the poor Green Jackets on the Masters tournament committee are currently to be found in the horizontal position in a darkened room, who can blame them?

There is still a persuasive argument for believing a hard and fast Augusta National will negate the Californian’s power once play begins, but it certainly hasn’t limited his imagination.

‘I’ve never seen it this fast so early before and I honestly don’t know if it will hurt or help me, but I do love the challenge,’ he said.

‘I think my length will help tremendously in enabling me to hit short irons into greens this hard, but we all know at this place length is only as good as you hit your next shot.’ 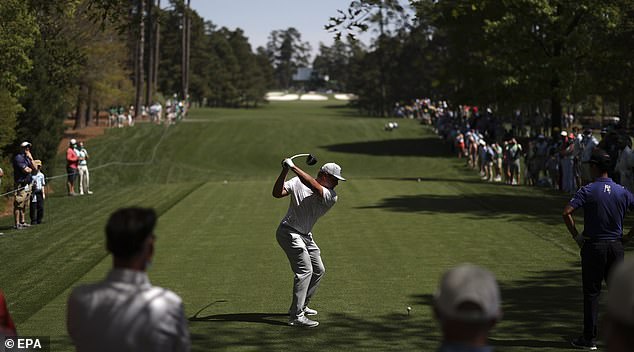 Armed with a unique driver, the 27-year-old is planning a new route around the Georgia course

DeChambeau learned as much in November, when he invariably found the wrong quadrants on the greens and ended up playing the final round with a 63-year-old grandfather in Bernhard Langer, who beat him by a shot.

Over the past four months, DeChambeau has shown different sides to his game, with plenty of artistry and general savviness alongside all that extraordinary power. At the Arnold Palmer Invitational last month, he showed his big heart as well to hold off Lee Westwood following an epic weekend duel.

When he completed his final round at Augusta last time, DeChambeau complained of dizzy spells while out on the course. Asked about it on Tuesday, the US Open champion came up with a lengthy answer about all the tests he underwent, from brain scans to heart monitors, the works.

‘At the end, we found nothing wrong,’ he said.

But something that has worked? A more sound sleep schedule, leading to a better breathing technique. And as he challenges the core beliefs and the essence of his sport, everyone in golf has also been taking deep breaths. 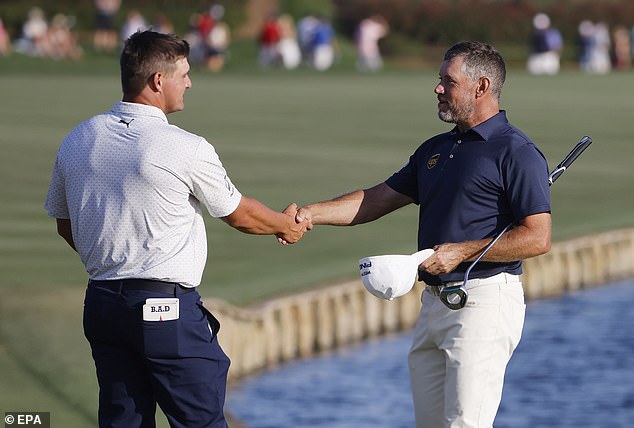 ‘I love going down numerous rabbit holes to see what I can find and it’s never going to stop,’ said DeChambeau. ‘It won me the US Open and now this tournament is the biggest goal for me, so bring it on.’

The new driver in the bag is one he’s been working on for several months. The press room sits at the end of the practice range and you can see him in the distance, hitting ball after ball that gets ever closer to the building, a distance of more than 400 yards.

The sight of floodlights being turned on at practice ranges because one man wants to keep going in the dark has become a familiar one on tour. So it was at Augusta on Tuesday night.

The fact his body can withstand all this punishment is every bit as awe-inspiring as the arc his drives are taking these days.

Whatever you’re doing on Thursday, make sure you pause at 6.36pm UK time for something that won’t be quite out of this world, but might well be close.