Australia’s Olympic team management rushed ice vests onto the course for golfers Hannah Green and Minjee Lee to use mid-round as American Nelly Korda flirted with a historic 59 to take a stranglehold on the gold medal in Tokyo.

Green and Lee admitted they had never used the unusual tactic of donning the temperature-control vests during a golf tournament, which is looming as a gold medal for world No.1 Korda as she opened up a handy buffer after the second round at Kasumigaseki Country Club.

The vests were used between shots and on tee boxes as organisers even resorted to offering a water bottle on each hole as the weather continued to play havoc with the women’s event. Tournament officials have flagged the prospect of the tournament being reduced to 54 holes if a forecast storm eventuates in Japan on Saturday.

On that score, Green (6 under) will be happy she made a move before the 36-hole mark after posting a six-under 65 to move up to eighth, still seven shots shy of runaway leader Korda (-13), who sizzled in a nine-under 62 on Thursday.

Asked if she thought she had enough time to contend for a medal if the tournament is cut short, Green said: “I really hope it’s four [rounds]. I’d like two more days to get back up there. I feel like now that I’ve had a good round I can see what’s possible and there’s no reason why I can’t keep climbing. 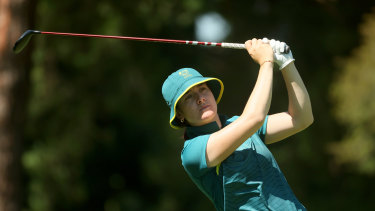 Hannan Green plays a shot from the tee.Credit:Getty Images

“I pretty much used [the ice vests] every opportunity I got. It wasn’t so bad the first nine holes, but the last nine was definitely starting to get warm. I’m very grateful for the team looking after my caddie and I.”

Said Lee: “I’ve never seen [ice vests on course]. The temperature is not so bad, it’s the sun and the humidity.

“We’re lucky to have such a great team around us to make that happen. I used it two or three times walking around. I had it on and off for a short period of time. I think it’s great. It feels good when you have it on.”

Korda’s vice-like grip on the tournament could have been even greater if not for a double bogey on her last hole, the only blemish of her second round. She stood on the 18th tee with the chance of a historic 59 with a birdie, but dropped back to -13 after a round that included holing out for eagle on the par-four sixth.

“I’ve never seen [ice vests on course]. I used it two or three times walking around. I think it’s great.”

Green’s round included eight birdies and was a study in steady excellence, shaking off the cobwebs of Wednesday when she finished with an even-par 71 in her first tournament in a month. She had returned to Australia and spent two weeks in quarantine to see family and friends before heading to Tokyo.

“I felt like yesterday was a matter of getting the rust off so it was hard to stay in the moment,” she said. “Today I gave myself a lot more opportunities for birdie and I managed to roll a couple of important putts in and it gave me some motivation and confidence with the putter.

“I came in clutch the last few holes and the putt [to save par] on the last could be huge come the weekend.”

Green’s drive on 18 nestled behind a pine tree, forcing her to lay up and then hit an approach for a makeable putt.

Coronavirus: Players Championship cancelled after one round

Why is Tiger Woods favourite for the US PGA Championship at Bethpage?