Jason Day has been handed his ticket to redemption in the Presidents Cup as International team captain Ernie Els named him as one of four discretionary picks for the December tournament in Melbourne.

It means Els' International team will have four Australians among the 12-man team to take on the United States – Day, Adam Scott, Marc Leishman and Cameron Smith. 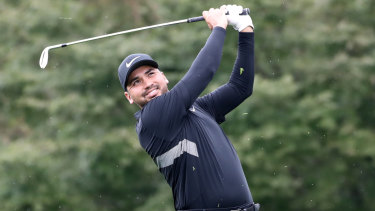 Captain’s pick: Jason Day will be one of four Australians for the International team at the Presidents Cup.Credit:Getty Images

Queenslander Day's inclusion will please the PGA Tour of the United States, which owns the biennial Presidents Cup, given it adds another Australian to the field.

But Day himself is in a rut on the course by his own high standards and he also has a poor record in the Presidents Cup to address. He lost three of his five matches in New Jersey in 2017 and his overall record is in the negative, but Els joked about Day's selection as being a "major shock".

As a former world No.1 player and a major winner, as well as being an Australian, Day was considered a certainty even though he was not among the top eight players who qualified automatically. "He brings a lot to this team," said the International captain. "He brings leadership, and he brings experience to the team."

Day previously won a World Cup individual title at Royal Melbourne in 2013, so knows his way around the contours and lightning fast greens of the sandbelt.

USA captain Tiger Woods is naming his four captain's picks on Friday, and is virtually certain to select himself on the back of his excellent return to form in Japan recently, where he won the Zozo Championship.

The Internationals have six rookies on their team now that the 20-year-old Niemann and 21-year-old Im were named on Thursday, and constitute the youngest Presidents Cup team in history.

But Els said it was not a conscious decision to go with youth, adding that the younger players had all earned their spots. "It all happened by accident, to be honest with you," he said.

The Presidents Cup will be played from December 12-15 at Royal Melbourne's composite course.

In 25 years of playing, the International team has only ever won the event once – at Royal Melbourne in 1998 under the late Peter Thomson's captaincy.