Hometown hero Jason Day admits his record at the Memorial Tournament is "terrible" but is determined to turn it around at the Jack Nicklaus-hosted event in Ohio this week.

Former world No.1 Day lives within 30 minutes of host venue Muirfield Village Golf Club – and is a member at the course – but he has only ever posted one top-25 result from 10 starts. 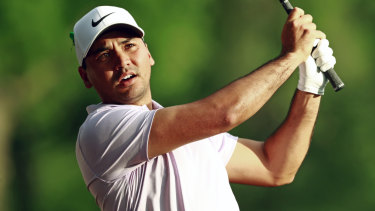 Jason Day is keen for success at Muirfield.Credit:AP

"Oh, yeah. It's terrible,"Day said at Muirfield Village on Tuesday.

The 31-year-old admitted the poor results were compounded by having extra family and friends in the gallery.

"Maybe I'm putting too much pressure on myself, but it's definitely frustrating to not get into contention," Day said.

"I really enjoy the golf course; it's fantastic. But I think I've been too aggressive in the past.

"My record is slowly getting better and I hope to change that this year."

Day puts it down to the fact Nicklaus, arguably the greatest iron player in golf's history, designed Muirfield Village as a tough test for approach shots.

"This is a second-shot golf course, and typically my irons haven't been the strongest part of my game," he said.

"If you can have your irons firing, you can play well around here.

"That's why Tiger Woods has won here five times. He's one of the best iron players ever."

Day's record has bemused Nicklaus, who last year said he was surprised the talented Australian had not enjoyed more success.

"Some [golfers] are really good playing at home, some guys aren't," Nicklaus said in 2018.

But Day is desperate to win the Memorial – one of the biggest tournaments on the USPGA Tour outside the four majors.

It is custom for the Memorial champion to shake hands with 18-time major winner Nicklaus on the 18th green on Sunday.

Having won the Arnold Palmer Invitational in 2016, the last player to win while the late Palmer was still alive, Day wants to shake 79-year-old Nicklaus' hand at Muirfield Village.

"I got to shake Arnie's hand … it'd be nice to shake Mr Nicklaus' hand after you win a tournament," he said.

"It'd be amazing to have this win on your resume."

Coronavirus: Players Championship cancelled after one round